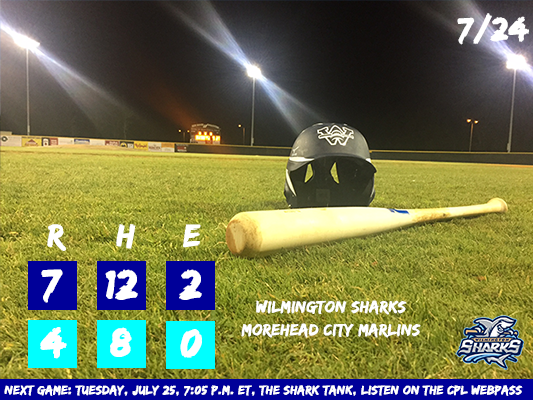 The Sharks and Marlins met for a 14th time this season, the 7th meeting at Big Rock Stadium.

In the first, the Sharks wasted no time against Flores. Justin Dean, Michael Sandle and Luke Morgan all singled off of the Marlins starter to lead off the contest. With 1 out, Brian Parreira grounded out to second base to score Dean. Then with 2 outs, Dayton Dugas hit a ball off the wall in center field to drive in Sandle and Morgan.

In the bottom half of the third, Kyle Skeels hit a towering shot to left field to lead off the frame.

The Sharks added to the two run lead in the top of the 5th and 6th innings. In the fifth, Justin Dean scored for the second time. Trevor McCutchin grounded out to second to drive in his CPL leading 38th run of the summer. In the next Sharks at bat, Wilmington started the inning with 5 straight singles off of Marlins reliever Kip Deshields. Dan Wilson drove home a run with Ward Coleman and Danny Wondrack on the corners. Later in the inning, Michael Sandle doubled to the center field wall to plate Coleman and Wilson.

Caleb Bishop of New Hanover High School was first out of the pen for Wilmington. The lefty worked a 1-2-3 6th inning. In the 7th, Bishop allowed a solo home run to Kyle Skeels and then a RBI double to Nick Podkul with 2 outs. The New Hanover graduate finished his outing with 2 runs allowed on two hits but he also struck out 2 Marlins.

In the 9th, Morehead City grabbed one more run off of Ryan Hall that went unearned after an error in right field. The Marlins did send the tying run to the plate with two outs in the inning. However, Ryan Hedrick came into the game to retire Daulton Weeks on just 1 pitch.

Mitch Spence won in his first start, while Ryan Flores earned the loss. Ryan Hedrick picked his third save for Wilmington.

The Sharks have now won 6 straight games overall and 8 in a row against Morehead City. Wilmington is 11-4 in the second half atop the East Division and 24-19 overall.

Wilmington returns home to face the Savannah Bananas tomorrow.  First pitch from Buck Hardee Field is at 7:05.  Coverage begins at 6:50 on the CPL Webpass.