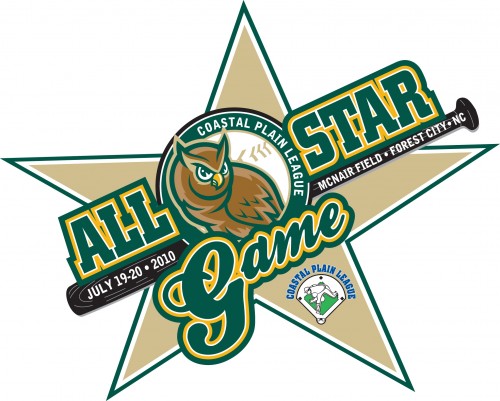 The Coastal Plain League 2010 All-Star Fan Fest and All-Star Game will be hosted by the Forest City Owls on July 19th and 20th at McNair Field in Forest City, N.C.

How Players Are Selected:
The 2010 Coastal Plain League All-Star Teams will be voted upon by each of the 15 head coaches and one media representative for each club. Possible All-Star candidates will be listed by position on their respective divisional (North, South, West) ballot, of which the coaches and media will vote from. Head coaches will not be allowed to vote for their own players, while Media reps will. The votes will be tallied and the 54 All-Stars will be known.

How Coaches Are Selected:
The 2010 Coastal Plain League All-Star Coaches will be determined based on First-Half Champions and overall winning percentage in the first half. The two All-Star head coaches will be the two coaches with the best overall winning percentage in the first half and who also won their respective division’s First-Half championship. The remaining coach from the other divisional First-Half championship team will be an assistant for one of the two All-Star teams based on geographics.

Out of the remaining coaches, the one with the next best overall winning percentage in the first half will be the other assistant coach. Finally, the remaining head coaches from the remaining CPL clubs not represented yet will all serve as an assistant for one of the two All-Star teams.