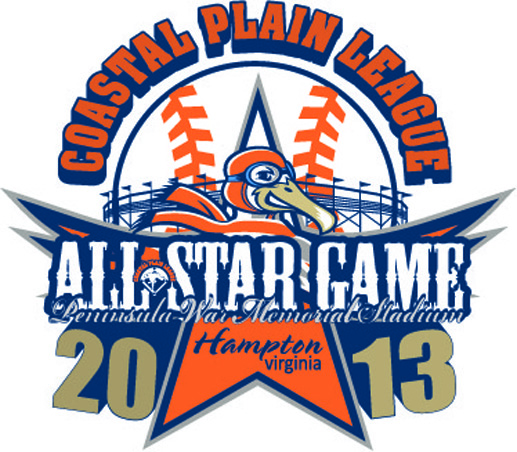 The Coastal Plain League 2013 All-Star Fan Fest and All-Star Game will be hosted by the Peninsula Pilots on July 7-8 at War Memorial Stadium in Hampton, Va.

The two-day event will feature a Fan Fest on the night before the All-Star Game, highlighted by the league’s first-ever All-Star Hitting Challenge. Then, the league’s annual All-Star luncheon, major league scout day, and All-Star Game will take place the following day. There will be several opportunities for fans to interact with the All-Stars during the event.

How Players Are Selected:
The 2013 Coastal Plain League All-Star Teams will be voted upon by each of the 14 head coaches and two media representatives for each club. All players will be eligible to be voted on and All-Star candidates will be listed by position on their respective divisional (East and West) ballot, of which the coaches, broadcasters, and media will vote from. Head coaches will not be allowed to vote for their own players, while broadcasters and media representatives will.

The votes will be tallied and the 54 All-Stars will be known. Twenty-seven players will be on the East and 27 will be on the West. Starters will be named based on those players receiving the highest vote tally at their position in their division.

During the challenge, hitters will swing for the fences or for unique targets located throughout the field. If a player connects on a home run, they will receive a preset amount of points, while any hit on a particular target in the field will also result in a preset amount of points (ranging from low to high). Additionally, there will also be obstacles that hitters will want to avoid hitting – which if they do make contact, will result in the loss of points. A complete list of targets and obstacles will be coming soon.

At the end of the first round, the top three (3) hitters from each All-Star team with the most points from that round will advance to round 2. Points will carry over from round to round. After round 2, the top two hitters based on overall points – one from the East and one from the West – will advance to the championship round. Finally, the winner of the CPL All-Star Hitting Challenge will be the hitter with the most points after all three rounds.