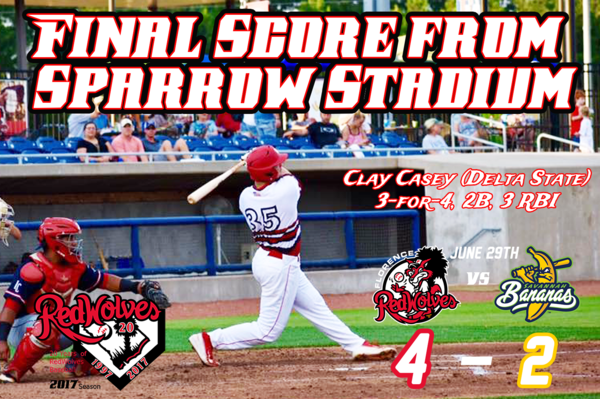 With the bases loaded and two outs in the bottom of the seventh inning the Florence RedWolves trailed 2-1 to the Savannah Bananas. Clay Casey stood in and belted a two-run base hit to the right-center gap giving the RedWolves a 3-2 lead, sealing the victory ending the nine-game losing streak Thursday night at Sparrow Stadium.

Savannah (12-14) scored in the top of the second inning on an RBI single off the bat of Utah Jones. With one out, Brandon Cassala singled to right field. Two batters later Logan Mattix singled up the middle and then Jones hit Cassala in to take the lead, 1-0.

The Bananas tacked on their second run of the night in the top of the sixth on an RBI base hit from LJ Talley. Matt Pita and Brandon Brocato both singled to open the frame and then Talley drove in Pita for the 2-0 lead.

The Florence RedWolves (14-10) got within a run in the bottom of the sixth as Clay Casey scored Tanner Mann-Fix with an RBI double to right field. Mann-Fix led off the inning with a single to left and was moved to second by a Zach Jacobs ground out to the pitcher. Casey stepped in the box and roped the double to put the RedWolves on the board to make it 2-1.

In the bottom of the seventh inning Florence took the lead over Savannah with big at bats put together. Down 2-1 entering the inning, Brandon Chapman worked a one-out walk. Storme Cooper smacked a double the wall in left to put runners in scoring positon and Mann-Fix was hit by a pitch, which loaded the bases. Jacobs grounded into a fielder’s choice that retired Chapman at the plate, but the bases remained loaded. With two outs and a 2-2 count, Casey sat back on a fast ball and lined the two-RBI base hit into right-center putting the RedWolves on top 3-to-2.

Florence added an insurance run in the bottom of the eighth inning off of an RBI single from Cooper. With two outs, Bailey Connell and Brandon Chapman worked walks. Cooper dug in and laced a single to right field as Bailey Connell slid under the tag at the plate for the score. The insurance run boded well for the home team giving them a 4-2 lead going into the ninth.

John Michael Stephens made his first start for the RedWolves and pitched well. In 5.0 innings the 6-foot-8 left-hander allowed two runs on seven hits with a walk and four strikeouts. James Williams (3-0), a reliever from the University of Georgia, came out of the bullpen to secure his third win of the season. Williams threw the sixth and seventh innings for Florence allowing just a hit, walking and striking out one. Tripper Ergle picked up his second save pitching the final two innings, walking one and striking out two.

Evan Lovick (2-2) started for Savannah and worked 6.2 innings, giving up three runs on seven hits with two walks and three strikeouts on 103 pitches.

The RedWolves escape their tenth loss of the season defeating the Savannah Bananas 4-2.

Florence heads on the road on Friday and Saturday, playing the Asheboro Copperheads Friday and a doubleheader with the Fayetteville SwampDogs Saturday. Visit www.florenceredwolves.com for more information and tickets.