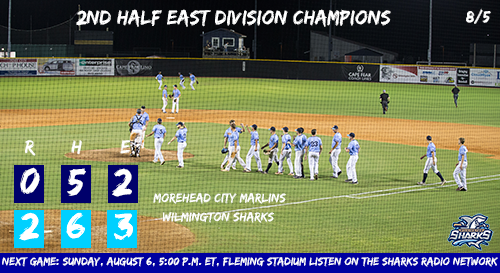 The Sharks and Marlins met for a 16th time this summer. On the line for Wilmington (31-22) was the second half championship and Morehead City (25-28) was just clinging to slim playoff hopes. The Shark’s pitching staff dominated the contest allowing just five hits and no runs. The 2-0 shutout is Wilmington’s 10th straight victory over the Fish and also clinched the 2nd Half title for the Sharks.

In the bottom of the first, Justin Dean singled and then stole second base. During the ensuing at bat, the center fielder advanced to third on a wild pitch by Marlins starter Nolan Clenney (1-2). Michael Sandle later grounded out to short to drive home the Sharks first run of the contest.  It was the 30th time Wilmington scored in the first inning this season.

From that point, the Sharks pitchers had all the run support they would need against the visitors. In the second inning, Mitch Spence (2-2) worked out of a bases loaded jam with one out. Then in the fourth and fifth innings, the freshman from USC-Aiken left a Marlins runner stranded at third. Morehead would leaven eight runners on base, including six in scoring position.

In the 5th, Wilmington added its second run of the contest. Dayton Dugas singled on the first pitch of his at bat to lead off the inning. The sophomore from Wichita State stole second for his second stolen base of the summer. The with one out, Ben Highfill hit a routine groundball to short that was booted by Nick Podkul. The error allowed Dugas to score from second base.

In the 7th, Spence turned the ball over to the bullpen with two outs and a runner in scoring position. Ryan Hall struck out Heath Mitchem to end that inning. In the 8th, the Presbyterian reliever recorded two outs before allowing runners on first in second. His teammate at school, Ryan Hedrick, came out of the pen and recorded the final out of the inning.

In the 9th, Hedrick completed the four-out save for his 5th save of the summer. Mitch Spence picked up the win, working 6 and two-third, allowing 4 hits and striking out 3. Nolan Clenney lost after 6 innings allowing 2 runs, one of which was earned.

Wilmington is now 18-7 in the second half and 31-22 overall, a half game behind Peninsula for the second seed.

The Sharks are on the road tomorrow to face the Wilson Tobs. First pitch from Fleming Stadium is at 5:00 P.M. Coverage on the Sharks Radio Network begins at 4:45.