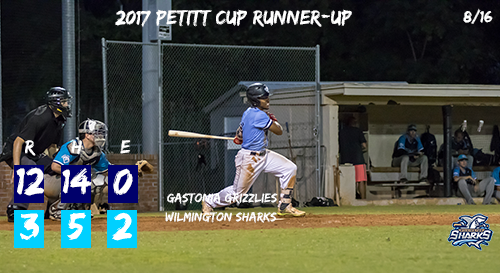 After a Game 1 defeat, Wilmington (0-2) needed to win two in a row Wednesday night over the Gastonia Grizzlies (2-0) at home. Scheduled for a doubleheader, the visitors needed just one game to clinch the Petitt Cup Championship. Gastonia teed off against the Sharks from the start en route to a 12-3 victory to sweep the series.

The Grizzlies wasted no time in the top of the first inning. On the first pitch of the contest, Chaz Davey doubled to the wall in left field off Colby Lee (0-1). A bunt from Ryan Cox put runners on the corners with no outs. Harris Yett hit a ground ball that was mishandled by Luke Morgan to score the first run for Gastonia. After runners advanced on a wild pitch, Ryan Cox scored on a throwing error by Colby Lee. Gastonia added one more in the inning to take a 3-0 lead.

Josh Maciejewski (1-0) allowed a leadoff base hit Justin Dean in the first inning. The southpaw followed by retiring the next 8 Sharks batters and faced the minimum through three innings.
Gastonia added to its lead with another crooked number in the top of the fourth against Colby Lee. The first five batters of the inning reached against the Sharks starter. Luke Setzer walked to lead off the inning, followed by four straight singles. Chaz Davey’s single drove home one run, while the next batter, Ryan Cox, added two more with his base hit to left field.  The Grizzlies scored a fourth on a sacrifice fly by Thomas Yoder to make it 7-0.

Wilmington finally got on the board in the home half of the fourth. Justin Dean doubled to lead off the inning. After a Michael Sandle fly out, Luke Morgan tripled down the right field line. Trevor McCutchin followed with a sacrifice fly to cut the deficit to five.

The visitors added to the lead once again in the 5th inning. Nick Beinlich led off the frame with a solo home run to left field off Sharks reliever Logan Michaels to make it 8-2.

The Sharks inched back again in the bottom of the sixth. Justin Dean reached base for the third time, walking to lead off the inning. Dean stole second for his fifth swipe of the postseason to put himself in scoring position. Then, Michael Sandle singled to left to score Dean to bring Wilmington within five. The left fielder from South Alabama later advanced to third with two outs, but was left stranded.

In the top of the 7th, Gastonia put the game out of the Sharks reach. After a leadoff single, Logan Michaels served up a two-run home run to Thomas Yoder to put the Grizzlies on top 10-3. Gastonia added two more runs in the frame on RBI base hits by Luke Setzer and Kyle Wilson.

The Sharks come up just shy of the third CPL championship in franchise history. The first two came in 1998 and 1999. For Gastonia it is the second Petitt Cup title in three tries. The Grizzlies beat Edenton in 2011 and lost to the Steamers in 2015.

Wilmington ends the season as the East 2nd Half Division Champions and takes home the East Division Pennant. Coach Wingo finishes his third season at the helm with three playoff appearances and 98 total wins.