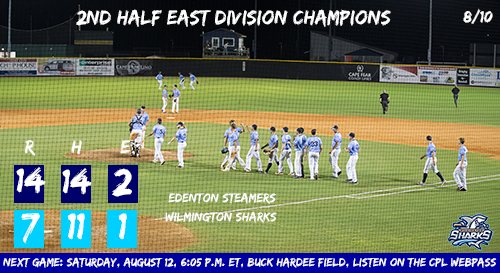 The Sharks are just one win away from advancing to the Petitt Cup Championship Series. Wilmington (1-0) came from behind to beat Edenton (0-1) 14-7 on the road at Historic Hicks Field. Trevor McCutchin led the way for Wilmington with a 3-5, 2 home runs, and 8 RBI performance. The Sharks have scored 27 runs in the first two postseason games.

It was not an easy start for the visitors. Edenton was on the board first in the bottom of the first. After a leadoff walk, Chris Ayers hit his 3rd home run of the summer against the Sharks to put Wilmington in an early two run hole.

In the 3rd, the visitors answered with RBI singles by Luke Morgan and Brian Parreira to knot the game back even. The tied did not last long, as Billy Wilson hit his first home run of the night, a towering shot to right field to restore the two-run lead.

Wilmington put another run on the board in the fifth. Trevor McCutchin drove in his first run of the night on a single through the left side to cut the deficit to 4-3.

The turning point of the contest came in the bottom half of the fifth inning. With one out and two runners on, Billy Wilson hit what he thought was his second home run of the night. Much to his dismay, Justin Dean made the play of the year for Wilmington robbing Wilson of the home run.  Logan Michaels then got a double play on a line out to third to end the inning and swing the momentum in Wilmington’s favor. Michaels finished with 5.2 innings pitched, 4 runs, 2 earned on 7 hits with 6 strikeouts.

The Steamers took a 4-3 lead into the top of the seventh inning. After two walks and two strikeouts by Sean Hughes, Danny Wondrack homered to center field to give Wilmington its first lead of the night, 6-4. However, the Steamers answered right back with two in the bottom to send the game to the 8th tied.

Chris Ayers came into to pitch the eighth for Edenton and struggled. The righty allowed the first four Sharks to all reach. Luke Morgan hit a ground ball to third with the bases loaded but Lucas Martinez dropped the throw home allowing the Sharks to take a 7-6 lead. Two pitches later, Trevor McCutchin hit the hardest home run of the summer for Wilmington. The ball jumped off the bat and was the second grand slam for the sophomore this summer. The five run frame put the Sharks on top 11-6.

Ryan Hedrick (1-0) picked up the win retiring all four batters he faced. Chris Ayers (0-2) lost to the Sharks for the second time this summer.

The two teams are off Friday before Game 2 back at the Shark Tank on Saturday. First pitch for the 7-inning contest is at 6:05. If necessary, Game 3 will follow 30 minutes after Game 2. Coverage starts on the CPL Webpass at 5:50 with Sharks Pregame.