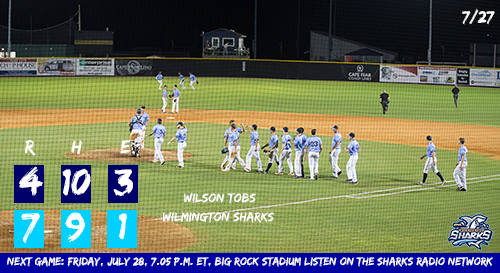 Early leads have been key to the Shark nine game-winning streak. For the fourth night in a row, Wilmington (27-19) scored in the first inning and never looked back against Wilson (14-32).

The Sharks jumped out to a four run lead after four innings. Timely hits were the key to the early lead as all four runs came with 2 outs in the inning.  The Tobs were then able to pull within 1, but Wilmington added three unanswered to win 7-4. The Sharks have won 9 in a row and are 4-0 during Shark Week.

In the first, Luke Morgan reached on a fielder’s choice for the second out of the inning. On the next pitch, Trevor McCutchin laced a triple down the right field line for his CPL leading 44th RBI of the summer.

In the next inning, Wilmington loaded the base with 2 outs against Wilson start Sam Luchansky (4-5). After falling behind 0-2, Michael Sandle walked on six pitches to plate the second run for the Sharks.

In the 4th, the Sharks added two more with two outs. Luke Morgan drove a pitch to the gap in left center field to score Danny Wondrack from third and Justin Dean from second.  At that point, Wilmington led 4-0 over the Tobs.

In the 5th, Wilson scored three against Sharks starter Colby Lee (4-3).  The freshman allowed three hits in the inning, including a two run home run to Shane Shepard.
With the lead cut to one, Wilmington answered in the bottom of the 6th. Michael Sandle drove his second run of the night on a sacrifice fly into right field. However, the night for Sandle ended with out a hit to end his 10 game hitting streak.

In the 7th, Wilmington added two more runs against the visitors thanks to an error by Andre Nnebe in right field. Brian Parreira hit a ball to the wall that was dropped and allowed McCutchin to score. The Sharks catcher came around to score later in the inning on a single by Danny Wondrack.

The Sharks bullpen was strong tonight in four innings of relief. Ryan Hall, Colt Springs and Ryan Hedrick, all from Presbyterian College, combined for four innings of work. The trio allowed one run on five hits, walked one, and stuck out four.

The Sharks are now 14-4 in the second half with a three game lead over Peninsula and Fayetteville and 27-19 overall, a game and a half behind the SwampDogs.