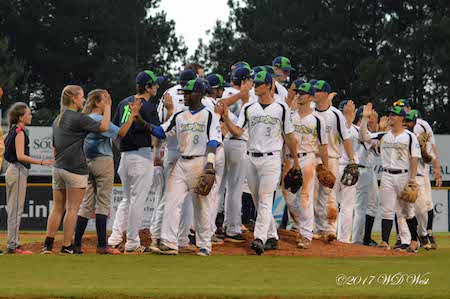 In game 1, Joey Gonzalez (Stetson) made his first start of the season, going the distance in the 7-inning affair without allowing a run. Gonzalez allowed just 6 hits while striking out six to improve to 1-0.

In game two Zach Neff (Austin Peay) (5-0) stole the show striking out fourteen, while the SwampDogs offense struck early ensuring a celebration would be had at The Swamp.

In the first inning the SwampDogs tagged Florence starter Garrett Wilson for 5 runs on 5 hits to ensure Saturday night would be one to remember in Fayetteville. Austin Edgette (Bloomsburg), Jay Robinson (New Orleans), Morrow, Newman, and Henrick all scoring.

Robinson would put an exclamation point on the night with a 3-run homerun, his second of the season, to provide a grand finale to the offensive fireworks.

The SwampDogs are now set to compete for the Petit Cup in August and try to sweep the East Division Titles by winning the second-half crown.

The SwampDogs head to Wilmington on Sunday before returning to the Swamp on Monday for their fireworks spectacular game against the Edenton Steamers. For all your SwampDogs news and updates please visit GoSwampDogs.com and follow us on Twitter @GoSwampDogs. The SwampDogs season is presented by Fayetteville Kia.