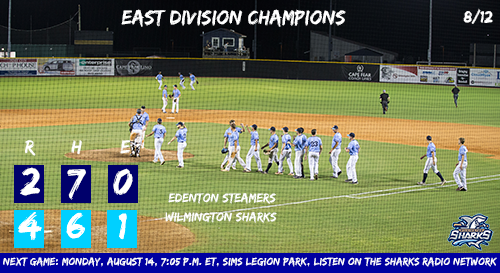 Scheduled for just 7 innings, Game 2 of the East Championship Series went to a 9th inning. Danny Wondrack came to the plate with Trevor McCutchin on first, one out and Wilmington (2-0) needing a run to move on. The junior from the College of Charleston hit his second home run of the series for the Sharks second walk-off win of the series.

In order to advance, the Sharks needed to win just one of two games scheduled Saturday night. From the start it was a pitchers duel between Breydan Gorham and Cody Maw.  The Sharks starter went 7 innings and allowed 2 runs, 1 earned on 7 hits and struck out 5. Meanwhile, Maw finished 6 complete innings, allowed 2 runs on 5 hits, fanned 5 and walked 1.

The lone slip up for both pitchers came in the 3rd inning. In the top of the frame, Gastonia scored both runs with two outs. Anthony Maselli and Chris Ayers singled before a Nick Wilson strikeout for the second out of the inning. During the at bat to Billy Wilson, Brian Parreira could not hang on to a low fastball that scored Maselli from third and moved Ayers to second. Later in the at bat, Wilson singled back up the middle to put Edenton (0-2) on top 2-0.

In the bottom of the 3rd, Wilmington responded with one out against Cody Maw. Cam Locklear was walked on seven pitches and then Justin Dean doubled down the first base line to put two Sharks in scoring position. Then on a two-strike count, Michael Sandle singled back up the middle to tie the game with his fourth and fifth RBI of the postseason.

The game went scoreless from that point until the bottom of the ninth on the two-run home run by Danny Wondrack. Both closers featured in the contest. Ryan Hedrick (1-0) got his second win of the series pitching two scoreless innings, striking out two and facing the minimum six batters. Carmen Giampetruzzi also threw two 1-2-3 innings for the Steamers with 1 strikeout. The losing pitch was Chris Ramirez (0-1), who faced three batters allowing the home run after a leadoff walk.

Wilmington is off tomorrow and then travels to Gastonia for Game 1 of the Championship Series. First pitch from Sims Legion Park is at 7:05 on Monday night, August 14th. Coverage on the Wilmington Sharks Radio Network begins at 6:50 with Sharks Pregame.