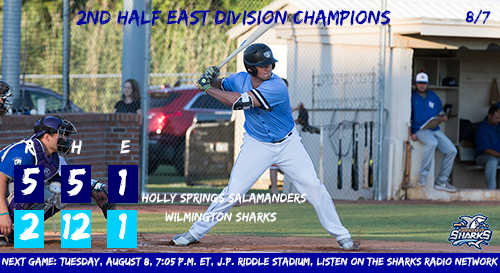 After a 1-9 start to the season at home, Wilmington (31-24) worked its way back to 13-13 at The Shark Tank heading into the final contest against Holly Springs. The lack of timely hits and runners left on base doomed the Sharks attempt at finishing with a positive record at home in the regular season.  The 2nd Half East Division Champions fell 5-2 to the Salamanders and left 12 on base in the process.

Peninsula and Fayetteville’s contests were both rained out, which means the Sharks are on the road to face the SwampDogs for the 7th time this summer at The Swamp. The season series is split 3-3 in Fayetteville.

In the 2nd inning, Holly Springs scored twice against the Sharks. The visitors led off the frame with a double and a single to plate the first run against Ryan Hall (0-2). With two outs, Jacob Jaye singled to left to score the second run.

Wilmington answered in the bottom of the inning. Colt Springs drove home Ben Highfill on a fielder’s choice that retired Dayton Dugas at second.

Dugas came on to pitch in the fourth after three innings from Ryan Hall. The starter allowed two earned runs on four hits with two strikeouts.  In relief, the sophomore from Wichita State retired all six batters he faced with two strikeouts.
In the sixth, the Salamanders added to the lead. Tripp Shelton and Patrick Wheeler both drove in runs against Cam Locklear. In the inning, Holly Springs scored without a hit.

The Sharks cut the deficit back to two in the seventh. Ben Highfill hit his second double of the night to score Danny Wondrack from second base.

Holly Springs added one more in the 8th against Justin Dean. The sophomore allowed one run without allowing a hit in the inning.

Wilmington left a runner on base in every inning of the contest except for the bottom of the 8th. Ryan Hedrick singled but was picked off by Phillip Sanderson.

Rabon Martin came on for the 9th to pick up his 2nd save for the Salamanders. Michael Hope (1-3) earned his first win and Ryan Hall (0-2) was the losing pitcher.

The first round of the Petit Cup Playoffs is set. #1 Peninsula hosts #4 Edenton, while #2 Fayetteville hosts #3 Wilmington. First pitch from Fayetteville is scheduled for 7:05 tomorrow. Coverage begins with Sharks Pregame at 6:50 on the Wilmington Sharks Radio Network.