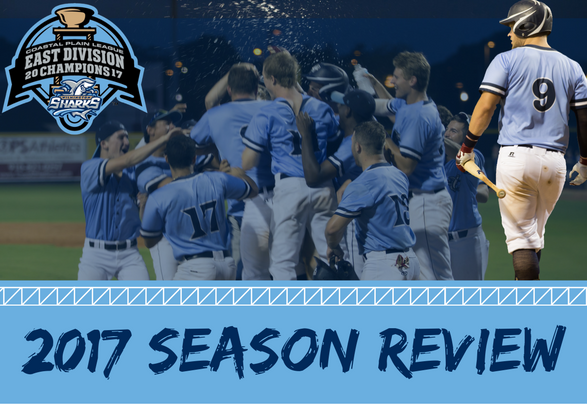 The 2017 Wilmington Sharks stumbled out of the gates, especially at home this season. However, Wilmington was able to hang on to a top four spot in the East Division in the first half. The Sharks completely flipped the script in the second half of the season.  Wilmington finished first in the East and went on a 10 game winning streak from July 14th to July 28th.  The Sharks clinched the second half East championship with a 2-0 win over Morehead City at home on August 5th.  Wilmington was the third seed in the East and defeated #2 Fayetteville and #4 Edenton on the way to the Petitt Cup Championship. In the finals, the Sharks came up just short of the franchises third championship against Gastonia.

The Sharks lost the first seven contests at Buck Hardee Field, five by just one run. The Sharks first home victory came on a walk-off single by Cory Everett on June 16th against Morehead City. Wilmington went on to lose two more in a row before opting to switch from the third base to the first base dugout.  After the 1-9 start, this change made a world of difference for the Sharks. The boys from the Port City finished the year winning 12 of the last 17 at the Shark tank to finish 13-14 at home.

Wilmington sent three players to the 2017 CPL All-Star Game in Holly Springs. Riley Knudsen and Luke Morgan from the College of Charleston and Jonathan Jahn, a left-handed starter for the Sharks participated in the mid-summer contest. Justin Dean, center fielder from Lenoir-Rhyne University finished third in the fan voting, just missing out on the All-Star Game.

In the second half, Wilmington started 5-4 before rattling off an East Division high, 10 wins in a row. During that stretch from July 14th to July 28th the Sharks beat Morehead City five times, Holly Springs twice, Savannah, Fayetteville and Wilson. The Savannah Bananas ended the streak on July 31st at Grayson Stadium 4-3.  The Sharks were road warriors all year long. During the streak, Wilmington won five contests away from home and on the season were 18-10 on the road during the regular season.

During the postseason, Wilmington dominated its East Division opponents. In the wild card round, the Sharks won at #2 Fayetteville 13-0 and hit three home runs. The next round, Wilmington faced the fourth seeded Edenton Steamers in a three game series. The Sharks swept the Steamers with a 14-7 Game 1 win on the road and a 4-2 win at home. In Game 2, Danny Wondrack of the College of Charleston hit a walk-off two-run home run to put Wilmington into the Petitt Cup Finals.  Against Gastonia, Wilmington jumped out to a fast start in Game 1. The Sharks lead 4-0 in the top of the second when the contest was suspended due to inclement weather. When play resumed the next day, it was all Grizzlies. Gastonia went on to take the first game 7-4 and continued the success the next day in a 12-3 victory over the Sharks.  It was the Sharks third championship appearance; Wilmington’s two championships are in 1998 and 1999.

During the regular season, Wilmington broke 9 franchise records and tied another. Individually Luke Morgan hit 0.385 and had 70 hits to break the team records. Morgan also led the Coastal Plain League in both of those categories. Wilmington’s shortstop also tied the franchise record with 51 RBI. Justin Dean set Sharks records with 51 runs and 28 walks. As a team, Wilmington set new five offensive records. The Sharks hit 0.278, scored 326 runs, had 522 hits, drove in 291 runs and hit 49 home runs. Other notable records, Michael Sandle was tied for first in the Coastal Plain League with four triples, Justin Dean finished second in runs, stolen bases and hits in the CPL, Luke Morgan was second in RBI and Daniel Johnson was second in strikeouts.

During the season, Luke Morgan from the College of Charleston reached base in all 53 games he played in, which included a 21 game hitting streak. Both streaks were tops in the Coastal Plain League this summer.

At the helm of the Sharks, Scott Wingo completed his third year in charge of the Sharks. Wingo owns a 92-70 record during the regular season and 6-6 in the postseason. Coach Wingo has made the playoffs in all three seasons in Wilmington. 2017 was his first Petitt Cup Finals appearance.