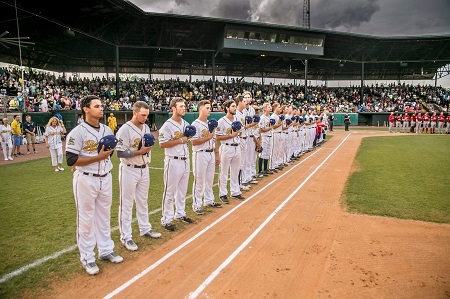 A record crowd of 4,338 welcomed the Savannah Bananas for the home opener against the Florence Redwolves. In a battle against former Bananas assistant coach, Travis Graves, the Bananas fell 7-4.

The threat of rain didn’t keep the Bananas fans away, as they packed into Grayson Stadium for the first time since game one of the 2016 championship series.

Florence got on the board in the first inning with a RBI single by Masen Hibbeler (SS Texas) and a RBI double by Zach Jacobs (1B FMU).

The Bananas got going in the bottom of the fourth with two runs as the rain started. Despite the weather, fans stuck it out to watch the home team rally.

The Redwolves failed to reach home through the top of the sixth inning. LJ Talley (1B Georgia) stole home to bring the Bananas to 3 in the bottom of the sixth. A RBI single by Max McDougald (2B Wofford) tied it up at 4-4.

RBI singles by Mason Meadows (C Georgia) and Cornell Nixon (2B Eastern Kentucky) put the Redwolves back up 6-4. They score one more run in the top of the ninth and take the win with a final score of 7-4.

The Bananas play at home to another sold out crowd tomorrow night, taking on the Lexington County Blowfish. The next home game with available tickets is Monday, June 5th. A championship ring ceremony will be held to celebrate head coach Sean West and the 2016 team. Less than 400 tickets remain. Tickets can be purchased at thesavannahbananas.com or by calling 912-712-2482.