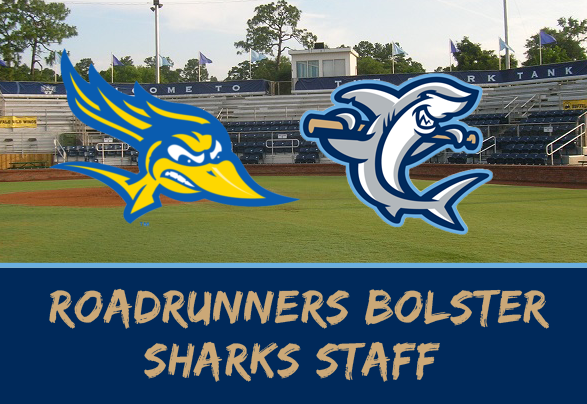 The most experienced of the bunch is southpaw Jordan Ragan. The left-handed junior stands at six foot, three inches and hails from Oregon. Ragan spent his first two seasons at the College of Southern Idaho before joining the Roadrunners this season.  Primarily a reliever, Ragan has made six appearances out of the bullpen and one start. The lefty is 0-1 with a 5.71 ERA and one save in his seven appearances.

Elijah Parks also joins the pitching staff for the Sharks this summer. The right-hander is 3-1 this season with a 4.28 ERA. So far this year, Parks has done a little bit of everything for Cal State Bakersfield. The righty has made three starts and come out of the bullpen eight times. In his most recent appearance, Parks threw a season high 91 pitches, going six innings, allowing just two runs and picked up the win over Utah Valley.

The third and final Roadrunner making the journey east is right-handed pitcher Davonte Butler.  The freshmen has made his presence felt for Cal State Bakersfield. Butler leads the team with 41.1 innings pitched and has made seven starts for the Roadrunners. The righty is 1-5 with a 4.35 ERA and has recorded a save as well.

Sharks Head Coach Tyler Jackson is excited about the acquisition of these three arms. “All three are good arms and come from a good program on the west coast,” said Jackson. “We are looking for all three to come and give us key innings all summer.”

The Sharks next roster announcement is Friday, April 27th.