Relievers Shine in Loss at Wilson 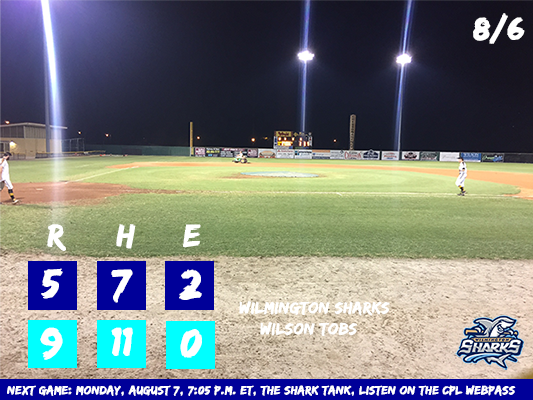 The Sharks travelled to Wilson (18-37) for the final road game of the regular season. Wilmington (31-23) experienced a bit of a hangover after clinching the 2nd Half Championship last night at home. The Sharks allowed eight runs on eight hits in the first two innings. However, four Wilmington relievers shut down the Tobs for just one run on three hits for the final six frames.

In the first, Wilson jumped on Sharks starter Caleb Bishop (0-1). The young lefty allowed five runs on six hits, including a leadoff double and a two-run home run with two outs. The southpaw did strike out the only left-handed batter he face, Carson McCurdy.

In the next Sharks at bat, the visitors jumped on the scored board. Brian Parreira scored on a groundout by Ward Coleman. However, the Tobs only extended the lead further in the bottom of the second. Wilson scored three more runs on two hits, despite two more strikeouts from Caleb Bishop.

Wilmington scored again in the third inning against Ted Stuka (1-2). Luke Morgan reached on a fielder’s choice that drove home Justin Dean. The RBI was Morgan’s 50th of the season and it was the 57th time Dean scored, both are team records.

Danny Wondrack took the mound for the Sharks in the third and fourth innings. The usual catcher struck out two batters on his way to consecutive 1-2-3 innings.

The Sharks again cut into the lead in the top of the fifth. With two outs, Luke Morgan doubled down the right field line for his 51st RBI of the summer. Trevor McCutchin followed on the next pitch with a single back up the middle to plate Morgan.

Ben Highfill came on to replace Wondrack in the fifth. The regular third baseman worked two innings for the Sharks and allowed one unearned run on two hits. The run came in the sixth on a base hit by Dawnoven Smith with two outs.

In the eighth, Wilmington scored one more run on a single by Ben Highfill to score Brian Parreira from second base.

Trevor McCutchin and Ward Coleman worked the final two innings on the mound for the Sharks and combined for one hit, no runs and two strikeouts.

Ted Stuka was the winning pitcher after 5.1 innings allowing 4 runs on 6 hits. Caleb Bishop lost in his first start allowing 8 runs, 7 earned on 8 hits in 2 innings.

Wilmington ends the regular season at home tomorrow against Holly Springs. First pitch is at 7:05 from The Shark Tank. Coverage starts at 6:50 on the CPL Webpass.