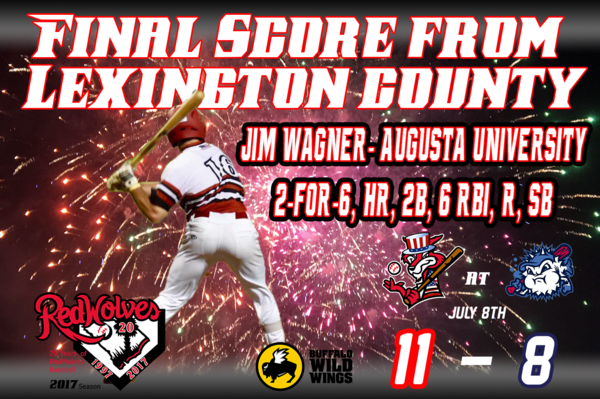 In a back and forth game, the Florence RedWolves found themselves on the upward side of an offensive battle, striking for 11 runs on 15 hits, with a combined 19 runs and 26 hits in the game overall. Jim Wagner and Zach Jacobs homer, propelling Florence to its 16th victory of the season in front of a packed house at Lexington County Baseball Stadium Saturday night.

Florence’s (17-15, 3-2) offense wasted no time in trying to seek vengeance over the Lexington County Blowfish (11-22, 2-4), launching two home runs in the first two innings and lashing six hits. Zach Jacobs put Florence up 1-0 in the first on a laser of a home run to right field, good for his sixth of the year.

In the second the RedWolves piled on four runs with the help of a three-run blast from Jim Wagner. Storme Cooper led off the inning bunting for a hit to the left side. Riley king found his way on base after a throwing error from Blowfish third baseman, Drew Ellis, to put the runners on the corners. With one out, Christian Flint regained the lead for the RedWolves 2-1, on an RBI single through the left side. Wagner then stepped in and roped his second homer of the summer to the opposite field improving the lead to 5-1.

Lexington County fought back in the bottom half of the third putting three runs on the board. Marshawn Taylor and Jared Williams led off the inning with walks, Taylor advanced to third on a stolen base and Williams moved to second on a wild pitch. Nick Guimbarda then stepped in and hit a two-run single to center to tie the game, 3-3. After RedWolves starter Rian Haire (2-1) got a strikeout, Drew Ellis grounded out to the right side to score Guimbarda, who moved up two bases on consecutive wild pitches, making the score 5-4 Florence.

The RedWolves scored a run in the fourth on a few Blowfish mistakes. With two outs in the inning, Clay Casey singled to right, extending his hitting streak to 10 games, and moved to second on a wild pitch. The next batter in Tyler Webb reached on an error by the third baseman. On the ensuing batter, Casey scored on a wild pitch to improve the lead to 6-4.

Two more runs were plated by Florence in the top of the fifth coming off the bat of Wagner, who sent a two-RBI double to the right center gap. After base hits by Cooper and Brandon Chapman, Riley King hit into a fielder’s choice and passed balls moved runners into scoring position. Wagner sent the two-run doubled to the wall to make it an 8-4 contest.

The Blowfish tried to retaliate scoring two runs to cut the Florence lead to 8-6. With one out, Guimbarda was hit by a pitch to get on base. After a flyout, Ellis hit a home run to left field to bring Lexington County within two.

Three more runs were plated for the RedWolves in the seventh and eighth innings. In the seventh, Wagner picked up his sixth run batted in on the evening reaching on a fielder’s choice. King led off the inning on a base hit to center, while Chapman followed with a single to left. Both runners advanced 90 feet on a wild pitch and Christian Flint walked to load the bases. Wagner grounded to second, that nabbed Flint for the second out, but King scored to make the score 9-6.

Riley Hogan brought the Blowfish within a run for the second time in the game, launching a two-run home run to right field bringing the score to 9-8.

Florence tacked on two more insurance runs in the seventh inning to put the icing on the cake, 11-8. With two away in the inning Tanner Mann-Fix drew a walk to extend the inning. Cooper laced an RBI triple into the gap in right-center to make the score 10-8. Riley King added to the affair singling through the right side to push Florence on top, 11-8.

Jack Henry Beasley came in and worked the final frame in relief, giving up just one hit and a walk to pick up his fifth save of the season.