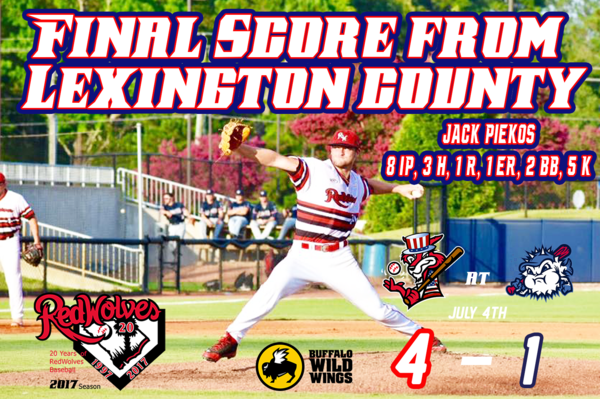 With fireworks exploding in the air the Florence RedWolves blasted their way past the Lexington County Blowfish, 4-1. Kevin Woodall homered, Florence had key doubles by Riley King and Mason Meadows, and an absolutely dominant performance on the mound by Jack Piekos Tuesday night in front of a sold-out crowd in Lexington County Baseball Stadium.

Fireworks weren’t the only awesome sights illuminated in the park. Entering the ninth inning, Jack Piekos (2-2) held the Lexington County Blowfish (10-18, 1-1) to three hits on the night, while he recorded five strikeouts and walked two. A left-hander out of Eastern Kentucky, Piekos allowed just one run on 115 pitches to give the Florence RedWolves (15-13, 1-0) their first win of the second half.

Lexington County’s Dominic Couci provided the only run for the Blowfish, hitting a solo home run to left in the bottom of the second inning to take a 1-0.

The RedWolves responded soundly in the top of the fourth inning. After Clay Casey drew a leadoff walk, Kevin Woodall belted a two-run home run to left-center to give Florence a 2-1 lead. With two outs, Riley King and Mason Meadows laced back-to-back doubles to left field. Meadows picked up the RBI on his double driving in King to improve the lead to 3-1.

In the top of the fifth, Florence added a run on a Woodall infield single. With two outs, Casey doubled and Woodall picked up his third RBI on the night beating out a single hit to third base, making the score 4-1.

James Williams locked the game down in the ninth, closing the door on the Blowfish, picking up his first save on the year.

Florence will return home on Wednesday, July 5th to take on the same Blowfish at 7pm. It will be stadium cup giveaway night presented by Groucho’s Deli. For more information and tickets visit www.florenceredwolves.com.