RedWolves Blast Off on HiToms, 7-1 in Rain-shortened Affair 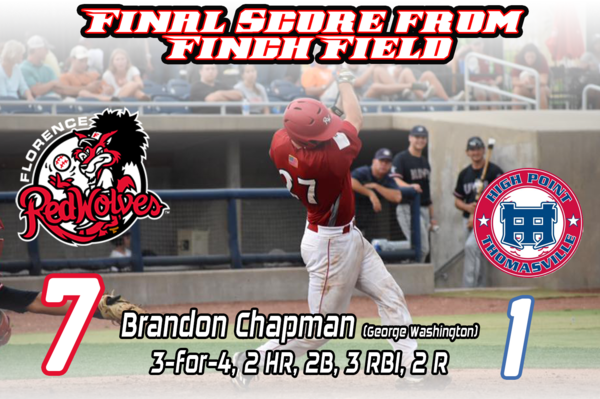 In a game that was meant to be completed at Sparrow Stadium on July 3rd, the Florence RedWolves traveled to High Point Thomasville to resume the game with the HiToms. Florence didn’t let the adversity of having the bases loaded against them to start the game, as they cranked four home runs on their way to a 7-1 victory at Finch Field Thursday night. Rain did start to fall hard and heavy, ending the game in the eighth inning, along with cancelling the scheduled game two.

The game picked up in the top of the first inning with the HiToms (26-19, 13-5) at bat, with the bases loaded, one out and Evan Edwards at the plate with a two-ball, two-strike count. With mass substitutions for both clubs, Florence’s (22-22, 8-9) starter Rian Haire was relieved after an out (dating back to the 7/3 game) by Chad Butcher (1-0). Butcher came in and threw one pitch that got the RedWolves out of the trouble, as Edwards grounded into a 1-4-6-3 double play to end the inning.

Florence put the foot on the gas however, pounding Riley Isenhour (4-1) for four innings. Isenhour gave up six runs, all earned, on nine hits, with two walks and a strikeout.

In the bottom of the first and one out, Zach Jacobs lifted his, and the team leading, seventh home run to take a 1-0 lead. Behind him, Clay Casey singled to left field, which extended his hitting streak to 10 games and has now reached safely in 23 straight. After a Tanner Mann-Fix walk put runners on first and second, Grayson Cottingham drove in Casey on a double to the left field wall to put the RedWolves up 2-0.

Brandon Chapman provided a good deal of offense for Florence Thursday, as he began a great night at the plate in the bottom of the second with a leadoff home run to left field pushing the lead to 3-0.

High Point Thomasville did pick up a run in the third on a double from Mason McClellan. Andrew Nieman walked to open the frame and stole second before Kip Brandenburg flew out to right. With one out, McClellan drove a line drive to left field that plated Nieman to cut the Florence lead to two runs, 3-1.

In the home half of the fourth inning, Riley King paved the way with a leadoff double off the wall in centerfield. Chapman came through again, ripping his second home run of the game and of the season, to deep centerfield to make it 5-1. With one out, Jim Wagner joined the home run parade, hitting the team’s fourth on the night to right field, putting the RedWolves up by five, 6-1.

Chapman finished the night with a 3-for-4 mark, accompanied by two home runs, a double, three runs batted in and two runs scored.

Isenhower gave way to Eli Boles, who gave up a run in the fifth inning. Boles opened the inning with back-to-back walks issued to Logan McRae and Riley King. With two outs and a runner on second base, Cornell Nixon cranked a line drive to centerfield and sped his way around the bases for a run scoring triple lifting Florence to a 7-1 lead.

Butcher made his debut for the RedWolves Thursday, as did reliever Tristen Watts. Butcher was on the mound for 4.2 innings, relenting just the one run on two hits, three walks and a strikeout to record his first victory of the season.

John Wesley Ray threw and inning for the Red and Black and picked up a strikeout.

Watts, who made his first appearance for Florence, came in for two innings and gave up a hit, but no runs scored while walking one and striking out two.

In the bottom of the eight Florence was able to load the bases with one out, as they threatened to score again, but mother nature had other plans. With McRae at the dish, the game was suspended due to lightning in the immediate area. During that delay, the heavy rains began to pour, which then caused the field to become unplayable.

The game was deemed official, having played five complete innings, handing the RedWolves their 22nd win of the season to move back to .500 on the season.

Florence will be back home on Friday, July 28th at 7pm to take on the Fayetteville SwampDogs. Be sure to make it out to Sparrow Stadium as there will be several fantastic events going on. It will be Cancer Awareness Night sponsored by Agri-Supply of Florence. Cancer Awareness jerseys worn by RedWolves players will be worn and auctioned off during the game with all proceeds going towards a local Cancer Society Group. It will be the Pepsi Game of the Week along with Lil D’s Dugout American Grill BBQ Friday and Fill the Kayak Friday. The RedWolves will also be holding their Pig Cooker Raffle Giveaway as well. Visit www.florenceredwolves.com for more information and tickets.