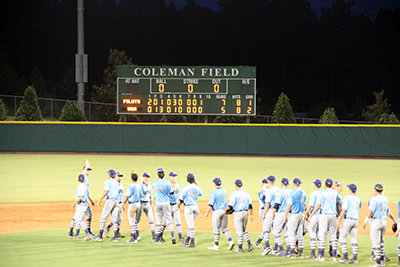 “I was proud of our guys tonight,” said Pilots’ head coach Hank Morgan. “That’s [Team USA] a great team over there. I always let my guys know if you play hard and get good at-bats then good things can happen. I was happy with our game stylistically too, we put some pressure on them with bunting, hitting and steals, it didn’t always work but we put that pressure on them.”

Facing the sophomore left-hander, Anthony Kay, out of Connecticut on the mound for USA, the Pilots came out aggressive plating two runs in the top of the first. With Connor Myers (Jr., Old Dominion) on third after singling earlier in the inning, Jimmy Kerrigan (Jr., Virginia Commonwealth) took off for second while Myers broke for home. The catcher’s throw to second was cut off allowing Kerrigan to make it in safely and an error on Team USA’s throw to the plate allowed Myers to score the first run of the game. Kerrigan later came around to score himself on a wild pitch for a 2-0 lead after a half-inning of play.

The Pilots Carson Herndon (RS-Sr., Liberty) pitched a quick one-two-three inning to start the game before allowing four runs over the next two. The CNT’s Bobby Dalbec (So., Arizona), drove a home run to right-center to start the scoring for USA in the second while, Bryson Brigman (Fr., San Diego), Colby Woodmansee (So., Arizona State) and KJ Harrison (Fr., Oregon State) each drove in a run in the fourth to give USA a 4-3 lead.

It didn’t take long for the Pilots to respond however, as they plated three runs of their own in the top half of the fifth to regain the lead 6-5. Skyler Weber (So., Georgia), who also homered in the top of the third, drove in another run on a single before his teammate Kerrigan hit a line shot to right for a two-RBI single and a 6-4 lead heading into the bottom half.

The CNT, scored once more in the bottom of the fifth but the game settled down once Thomas Busbice (Jr., Old Dominion) came on to pitch for the Pilots who finished with 2 2/3 innings pitched, allowing only one hit and no runs while striking out two for the win.

“His slider was great,” Coach Morgan said. “He was getting ahead of hitters, when he does that he is really tough.”

USA made one more late push in the bottom of the eighth, getting two runners on before Taylor Edens (Jr., Virginia Military) came on for the Pilots out of the pen to strikeout Chris Okey (So., Clemson) to end the threat. Edens stayed in to finish off the game in the bottom of the ninth to notch the save.

Weber was the offensive leader for the Pilots finishing 3-for-4 with a home run, two RBI and one run scored.

“He really rose to the occasion,” said Coach Morgan. “He’s been playing in a big setting with Georgia in the SEC, he gave us some competitive at-bats out there.”

The Coastal Plain League is the nation’s hottest summer collegiate baseball league. Celebrating its 19th season in 2015, the CPL features 15 teams playing in North Carolina, South Carolina and Virginia. The CPL gives college players the chance to refine their skills with the use of wooden bats. Players are housed with local host families for the summer and past experiences have been very positive for both players and hosts. The CPL has had over 1,200 alumni drafted and 79 of those – including 2011 AL MVP and Cy Young winner Justin Verlander – make their Major League debut; while another notable alum - Russell Wilson - won Super Bowl XLVIII. For more information on the Coastal Plain League, please visit the league website at www.coastalplain.com and follow us via Twitter @CPLBaseball.