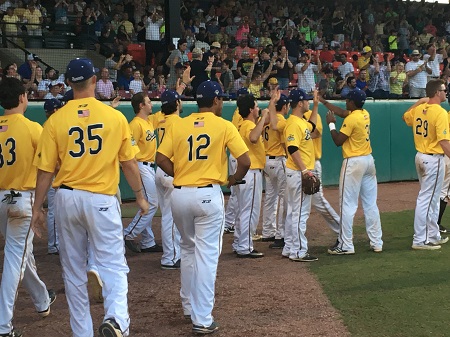 In front of two sold out crowds, the Bananas swept the RedWolves 5-2 in game one and 4-2 in the nightcap.

In game one, a Super Splash Day crowd of 4,010 kids watched as Jakob Nunez (UTA) and Utah Jones (UNC) drove in key RBIs for the Bananas.

In the fourth inning of game one Jacob Southern (Jacksonville University) hit a single followed by Jones blasting a double to tie the game at two. Nunez was next with another single, bringing Jones in to put the Bananas in the lead 3-2.

The Bananas shut out the RedWolves for the remainder of the game, while Nunez drove in two more to bring the final score to 5-2.

A crowd of 4,177 arrived for the nightcap to take in a second dose of potassium with the Bananas winning 4-2. This marked the twelfth straight sell out to open the season for the Bananas.

The Bananas took the lead early in the second inning with RBIs from both Jones and Christian Hollie (UTA). In the sixth inning, Southern played hero, driving in two runs with a broken bat single over the third baseman’s head. This was all Kenny La Pierre (San Diego State) needed as he closed out a complete game effort and bumped his record to 2-0.

The sweep today marks the Bananas’ fifth straight win against the RedWolves (13-11). The Bananas, now 12-13, have won six straight games at home.

The Bananas will face the RedWolves again tomorrow in Florence. They will be back home again to face the Lexington County Blowfish in front of another sold out crowd on Friday, June 30th. Don’t miss your chance to catch the fun, tickets are available for our July 6th game, featuring Thirsty Thursday beer specials from Budweiser. Tickets can be purchased at www.thesavannahbananas.com or by calling 912-712-2482.