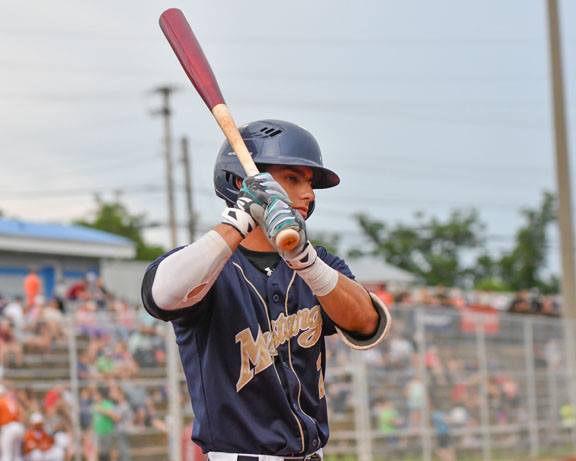 The Mustangs welcomed in the Florence Redwolves for a Wednesday night matchup. With Omar Maldonado III making his first start of the summer, the Mustangs gave him some early run support to give Martinsville the lead. The bullpen worked out of some tough spots and the Mustangs were able to top the Redwolves 7-3.

Florence scored a run in the first to take an early lead but Martinsville responded in the home half of the inning.

Florence sent Chad Butcher (1-1) to the mound to face the Mustangs offense. Matt Dunlevy reached on an error to lead things off and would later score on an RBI single from Lee Sponseller. Later in the inning with the bases loaded, Julian Lopez worked a walk and the Mustangs led 2-1.

Martinsville got production from two of the new guys in the second inning. A leadoff single by Ethan Goforth set up Dunlevy. The junior from VMI launched his second home run of the summer over the right field wall and the Mustangs led 4-1.

In the fourth inning with the bases loaded Maldonado remained in the game with just one out. After getting his eighth strikeout of the night, the right-hander got a flyout to end the threat.

Chris Isaac (1-0) took over in the fifth for Martinsville. The newcomer got some help from his defense along the way. With a man on, Florence slugger Zach Jacobs hit a deep fly-ball to right-center. Mustangs centerfielder Zach Weatherford raced to the wall and made a leaping catch over the wall to preserve the Mustangs four-run lead.

Florence got a run in the sixth and was looking for more but Martinsville brought in Patrick Orlando. The freshman out of Coastal Carolina got out of a bases loaded jam and Martinsville still led 6-3. The Redwolves left 12 men on base in the game.

Orlando pitched the seventh and eighth inning without allowing a run. He allowed one hit and struck out three.

Martinsville added a run in the seventh on an RBI double from Keaton Weisz and the Mustangs led 7-3. Weisz went 3-4 and extended his hitting streak to 11 games.

Preston Szuch shut the door in the ninth inning to give Martinsville their second win in a row. The Mustangs improved to 21-29 while Florence saw their playoff hopes take a hit, dropping to 26-26. The Mustangs will host High Point-Thomasville tonight at 7:15.