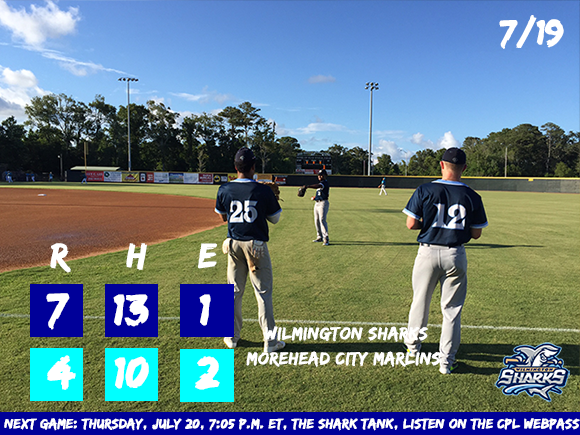 The Sharks were back in action tonight against Morehead City (16-20) after four days off. Wilmington (20-19) had won five straight against the Marlins.

Wilmington’s offense started early against Marlins starter Quinton Driggers (2-3) in the top of the 1st. Justin Dean lead off the contest with a double off the center field wall. Michael Sandle walked to put two on with no outs. Dean stole third base and then Sandle got himself into a pickle that allowed the Sharks center fielder to score. Luke Morgan walked with one out, and then the shortstop stole second. Trevor McCutchin moved the runner over with a groundout and then Morgan scored on a passed ball to put the visitors on top 2-0.

In the top of the 4th, Trevor McCutchin absolutely clobbered the first pitch he saw to right field. Later, with one out, Brian Parreira doubled and then came around to score on Ward Coleman’s two out single.  The Marlins answered in the bottom of the inning on a solo home run by first baseman Daulton Weeks.

Wilmington added to the lead in the top of the 7th inning. Dan Wilson led off the frame reaching on an error and then stole second. With one out, Michael Sandle singled into right field to put the Sharks on top 5-1.

The next inning, Brian Parreira led of the 8th with a solo home run to right field. Morehead City made the contest a little more interesting in the bottom of the innings. Kyle Skeels launched a three-run home run to left field to cut the Sharks lead to 6-4.

In the 9th, Luke Morgan gave his team an insurance run with his second home run of the summer, a solo shot to the power alley in left field.

Ryan Hedrick came on to record the final five outs for Wilmington to pick up his first save. Meanwhile, Breydan Gorham earned the win and Quinton Driggers picked up the loss.

The Sharks are now 7-4 in the second half and 20-19 overall. Wilmington is also 8-4 against the Marlins and have won 6 straight against Morehead City.

Wilmington faces Morehead City tomorrow night for the second night in a row.  First pitch from the Shark Tank is at 7:05.  Coverage begins at 6:50 on the CPL Webpass.