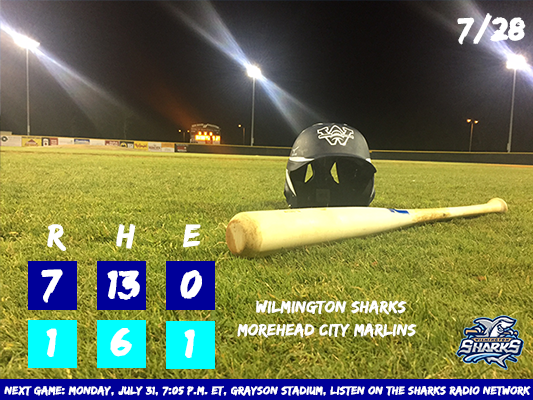 For the second outing in a row, Logan Michaels shut down the Morehead City Marlins (20-25). The redshirt junior from Oral Roberts went seven and a third innings, allowing one unearned run on four hits, while striking out five.

For the fifth time this week, the Sharks scored in the first inning. Justin Dean reached on an error, followed by a Michael Sandle single. Luke Morgan was then hit on the pitch to load the bases to open the 15th contest against the Marlins. With one out, Brian Parreira singled to left to put the Sharks on the board.

The second inning broke the game open for the Sharks. Danny Wondrack led off the inning with a line drive solo home run to left field. On the very next pitch, Thatcher Coleman hit an identical home run to left. Then with one out, Justin Dean singled to center field. Michael Sandle hit the Sharks third homer of the inning to right to extend the lead to 5. It is the second time this season the Sharks have hit 3 home runs in an inning. Also, every active position player has hit a home run this summer; Michael Sandle was the last to do so.

Meanwhile, Logan Michaels was perfect on the mound through three innings against the Marlins and did not allow a hit until the 5th inning.

In the fourth, Morehead City walked twice in the inning against Michaels. After a passed ball, the runners were in scoring position with one out. Will Matthiessen hit a sacrifice fly into center field to score the only run of the game for the Marlins.

In the 5th, the Sharks scored on a double off the wall in center field by Danny Wondrack. In the bottom half, the Marlins loaded the bases with their first three hits of the contest. Michaels registered his fourth strikeout for the first out. The next better lined out into left field and Alec Wilson was doubled off at second base to end the inning.

Wilmington added one more insurance in the eighth inning. Cam Locklear singled home Dan Wilson to give the Sharks a six run advantage.

Logan Michaels (2-1) won for the second time against the Marlins and Zach Usselman (1-2) lost after lasting just an inning and a third.

Wilmington is off on Saturday and Sunday before a two game stretch on the road. The Sharks are in Savannah on July 31st and at Florence on August 1st.