Late Push Not Enough Against Fayetteville 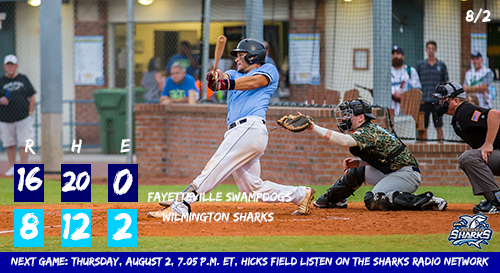 In the first, the Dogs jumped out to an early 2-0 lead. With two outs, Jayson Newman hit his 1st home run of the night to right field. The Sharks answered in the bottom of the frame. Luke Morgan singled back up the middle to score Justin Dean.

In the second, Wilmington tied the contest at 2. With runners on first and second, Justin Dean singled up the middle to score Dayton Dugas.

In the visitors next at bat Fayetteville would take the lead for good. With runners on first and second and one out, Matt Morrow collected his second base hit on a single to right field to score Austin Edgette. 2 innings later in the 5th, the SwampDogs added two more on a double by Jose Rojas and a ground out by Andrew Henrickson.

In the bottom of the fifth, Wilmington cut the deficit back to one. Luke Morgan singled into right center field to score Cam Locklear and Justin Dean for his 2nd and 3rd RBI of the contest.

From the 5th to the 9th innings, Fayetteville scored at least two runs in each of those five innings. In the sixth, the Dogs scored two against the starter Breydan Gorham. The next inning, Fayetteville hit three home runs, a two run shot by Matt Morrow, Jayson Newman’s second dinger and a solo homer by Justin Hawkins. Heading to the 8th, the visitors led 11-4.

Fayetteville added three more in the eighth, including two on a single by Mike Farnell.

The Sharks made a push in the 8th. With one on and one out, Cam Locklear homered to left field for the second consecutive night.  Three batters later, Dan Wilson hit his second home run of the season, a two run shot to left field as well.  The four runs cut the deficit to six heading to the 9th.

Fayetteville scored two more in the ninth on three hits against Sharks reliever Ward Coleman. The SwampDogs finished with 16 runs on 20 hits against 5 different Wilmington pitchers.

The Sharks missed the opportunity to move into sole possession of first place in the East division. Wilmington is now 16-6 in the second half and 29-21 overall. The Sharks finish the regular season 4-10 against Fayetteville.

Wilmington hits the road for a double header at Edenton. First pitch is at 6:00 from Historic Hicks Field. Coverage starts at 5:45 on the CPL Webpass.