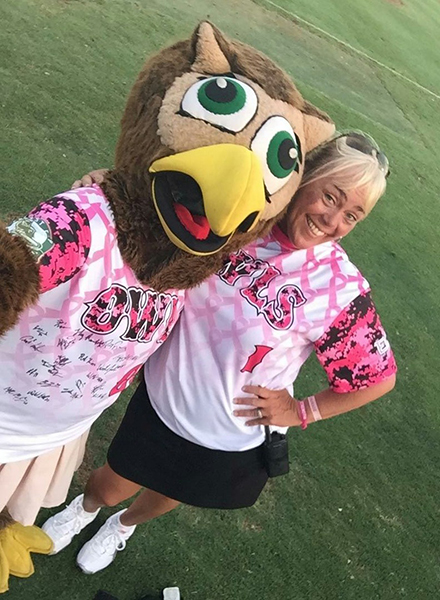 “On behalf of the Coastal Plain League, I congratulate Kiva on a wonderful year and a much improved summer for Forest City,” said CPL COO/Commissioner Justin Sellers. “The Owls did very well this year and her leadership, experience, and engagement definitely helped. She is truly devoted to giving back to the community that supports the Owls, and to helping the club grow both on and off the field. That effort is noticed and appreciated by not only those in Forest City, but also by her colleagues across the CPL. This honor stands to acknowledge that and the fact that it’s people like Kiva - and our other nominees - that help make our league better.”

Fuller completed her ninth year with the Owls in 2017, having initially joined the team during the 2009 season as ballpark staff. Ownership saw her potential following her first year and hired her to a full-time front office position, a role she has grown with ever since. Her nomination and selection as the Executive of the Year came via a process in which teams around the league nominate and thereafter vote on who they feel is most deserving. In addition to Fuller the following candidates were nominated: Brian Larkin (Lexington County Blowfish), Brian McConnell (Martinsville Mustangs), Jared Orton (Savannah Bananas) and Mike Bell (Wilson Tobs.)

“By receiving this award, I am truly humbled as well as extremely honored and grateful for my CPL colleagues’ confidence in me,” said Fuller.

Fuller and the Owls organization set out in 2017 to get back to its community roots and went into the offseason with this as their driving motivation: “How can the Owls truly impact our community’s needs?” From this thought, Fuller proposed that the teams’ Friday night games should all be focused on the bringing awareness to the issues that matter to their community. Issues ranging from food and hygiene to fostering children and situations of abuse were all highlighted throughout the year, an initiative that was deemed a huge success by all involved as over $7,000 was raised in the first year.

In addition to focusing on their own community, Fuller helped organized the team’s first Splash Day that saw over 500 children from surrounding communities come over for the event. This included groups from Summer Care programs, YMCA Summer Care Programs / Camps and Boys & Girls Clubs, all of which were treated to a morning of water slides, dunk tanks, and cooling off under the hot North Carolina sun before settling in for a matinee Owls game.

“This season’s interns and ballpark staff were the best this organization has ever had the privilege of working with,” said Fuller. “They were truly instrumental in all of our accomplishments. Fan experience, whether at McNair Field or joining with our fans on community evens such as Habitat for Humanity, was always the forefront of our goal.”

This commitment to fan experience stretched to all areas, including the addition of “The Perch,” a raised porch down the right-field line that allowed fans a more catered experience while at the ballpark. The area was sold to groups throughout the season as well as open to fans who purchased the special Perch tickets allowing them access to drinks and food, as well as one of the best views in the park.

In the end, each of these improvements and initiatives led to Fuller and the Owls posting a 48% increase in attendance from a season ago. Furthermore, their attendance numbers were the best the team has seen in years as their commitment to community, and the on-field success of the Owls team who posted the best regular season record in the CPL, drew their fanbase back in. All of which was recognized by team officials in their nomination and selection of Fuller for Executive of the Year.

“Lastly, I would like to thank the Owls organization, the Coastal Plain League and my fellow CPL colleagues, as well as my family,” said Fuller “Their continued support and encouragement through the years has been invaluable.”