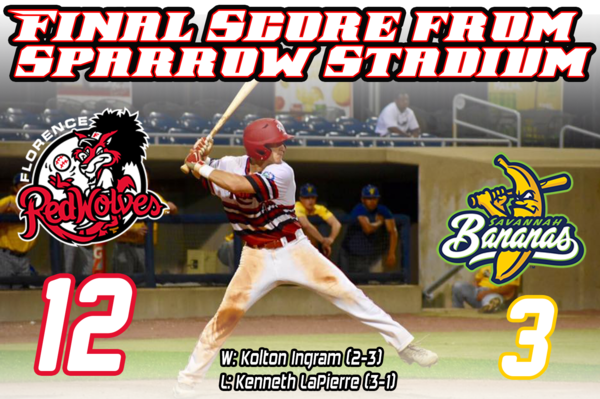 Behind a quality start from Kolton Ingram, 12 runs, 11 hits and capitalizing on pitching mistakes, the Florence RedWolves took the Savannah Bananas to the blender, 12-to-3 on Thursday night at Sparrow Stadium.

Savannah (16-17, 3-3) jumped out on top in the first inning on a sacrifice fly from Jacob Southern. With one out, Logan Mattix singled through the right side and moved to third after two wild pitches. Southern stepped in a drove in the RBI flying out to centerfield to make it a 1-0 game.

Florence (19-15, 5-2) however, responded soundly in the bottom half of the third inning pouring seven runs on Savannah’s starter, Kenneth LaPierre (3-1). The route was led off by Cornell Nixon earning a walk, behind a Masen Hibbeler single to right, which put both runners in scoring position after Hibbeler moved to third on the play at third. Zach Jacobs tied the game 1-1 on a sacrifice fly to center, and Hibbeler moved to third. Clay Casey, who saw his hitting streak halt at 12 games, drew a walk and stole second. With two outs, the RedWolves proceeded to send eight more batters to the plate. Matt Beaird collected a two-RBI single to center to give Florence a 3-1 lead. After base hits from Jim Wagner, Storme Cooper and Tanner Mann-Fix the lead increased to 6-1. Having batted around in the inning, Nixon reached again by getting plunked, while Hibbeler singled for the second time driving in the seventh run.

The RedWolves picked up run number eight in the bottom of the fourth inning on a sacrifice line out from Cooper. Tyler Webb led off the inning with a base hit to left followed by a Beaird walk. Wagner proceeded to ground into a fielder’s choice to put the runners on the corners with one out. Cooper lifted the line shot to left deep enough to score Webb from third to make the score 8-1.

Savannah tried to peel back into things in the top of the seventh by scoring two runs, but it wouldn’t be enough. With one out Utah Jones singled to left and moved to second on a passed ball. Christian Hollie also singled, putting runners in scoring positon. The next batter in Logan Mattix scored Jones on a seeing-eye single to left. After a fly out, Jacob Southern provided an RBI knock to center to bring the Bananas within five, 8-3.

Florence retaliated right back in the bottom half of the seventh scoring four runs of their own, really digging into the bullpen of Savannah. Nixon led off the inning drawing his third walk of the evening. Behind a strikeout, Jacobs shot a base hit back up the middle and Casey drew a walk to load the bases. Webb stood in and delivered the only extra base hit on the night, driving in two runs on the play extending the lead 10-3. A wild pitch moved the runners up a base each, plating Casey. Wagner then walked and Cooper grounded out to third, which scored Webb on the play to put the score at 12-to-3.

With a loss from Forest City, Florence claims sole possession of second place in the second half standings of the West Division.

Florence will play the Savannah Bananas on the road Friday, July 14th. Visit www.florenceredwolves.com for more information and tickets.