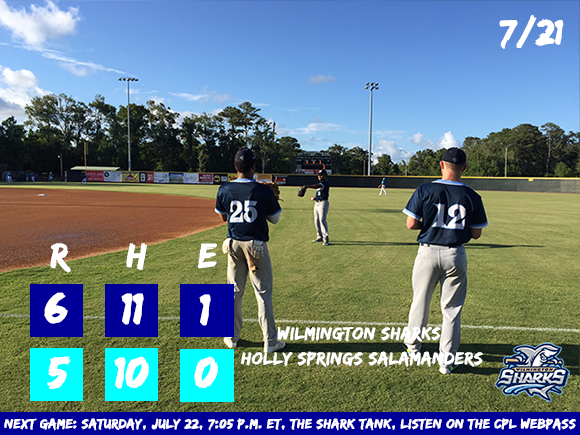 The Sharks (22-19) and Salamanders (18-24) met for the fourth time this season, with the road team winning the previous three.

On the first pitch of the game, Justin Dean hit a solo home run to left field off his teammate at Lenoir-Rhyne University John Grigg. For Grigg, it was his first pitch he had thrown all summer.

In the top of the 3rd, Wilmington tacked on two more against the Salamanders. The Sharks loaded the bases with 1 out and Luke Morgan coming to the plate. However, it was a tough night for the Sharks shortstop as he struck out looking in a 0-4 performance. With two outs though, Trevor McCutchin cashed in with a single off the wall that cleared the bases.

With a 4-0 lead, Logan Michaels was rolling on the mound for the Sharks. From the end of the third inning to the beginning of the sixth, Michaels recorded 8 straight outs all by strike out. During that span, 11 straight batters hit with 2 strike counts.  That stretch also included Michaels striking out 6 straight batters in the fourth and fifth innings.

In the sixth, Holly Springs put one on the board against the Sharks. With 1 out, Peyton Isaacson singled to right to score Tripp Shelton. Through 6, Wilmington led the Salamanders 4-1.

In the 7th, Holly Springs teed off against Mitch Spence out of the Sharks bullpen. The Salamanders put runners on second and third with 1 out. Spence struck out Josh Hollander but then allowed a two out, two RBI single to Tripp Shelton to cut the lead to 1. Evan Brabrand then came out of the bullpen and allowed a hit to Adam Sisk, which scored Shelton to tie the ball game.

However, the Sharks responded in the 8th. Trevor McCutchin singled to lead off the inning. Then Dayton Dugas crushed a 1-1 pitch over the wall in straightaway center field to put the Sharks back on top by 2.

In the bottom of the 9th, Evan Brabrand remained in the contest for Wilmington. With two outs, Josh Hollander reached third base. Adam Sisk drove Hollander home on a full count to cut the deficit to 1. Then, Peyton Isaacson, who was 2-2 with 2 walks, groundout to Trevor McCutchin to end the game.

Wilmington takes on Holly Springs tomorrow night for the second night in a row.  First pitch from The Shark Tank is at 7:05.  Coverage begins at 6:50 on the CPL Webpass.