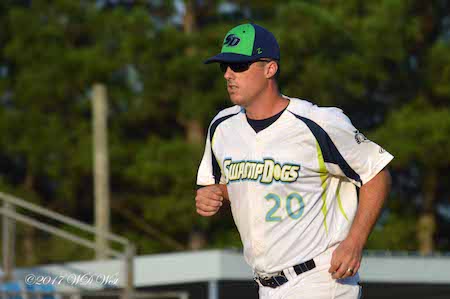 Hollod’s first season success earned him the opportunity to lead the East Division All-Star team in this year’s Coastal Plain League All-Star Game, leading the East to a 2-1 victory in Holly Springs. Hollod has coached three SwampDogs pitchers to Pitcher of the Week honors while Justin Hawkins (Clemson) picked up Fayetteville’s lone Hitter of the Week honor this year. The SwampDogs continue to lead the league in batting average, runs scored, and hits. In addition, the SwampDogs pitching staff has the 4th best ERA in the league under Hollod’s tutelage.

Hollod also led the SwampDogs to a top two position in the East Division overall standings ensuring the SwampDogs will host a playoff game this Tuesday.

Hollod is already looking forward to what lies ahead both this season and beyond, “I want to thank Jeremy and Lew for the offer. I’ve enjoyed my time here and look forward to coming back and will be getting started right away on next year’s roster.”

For General Manager Jeremy Aagard, the decision to ask Coach Hollod to return for another season was easy, “We’re excited for Matt to return next year. His success on the field has been fun to watch and the young men he has recruited have been incredible in our community.”

The SwampDogs return to The Swamp on Monday Night for Teacher Appreciation Night against the Wilson Tobs. First pitch is at 7:05 with the gates opening at 6. For all your SwampDogs news and updates please visit GoSwampDogs.com and follow us on Twitter @GoSwampDogs. The SwampDogs season is presented by Fayetteville Kia.