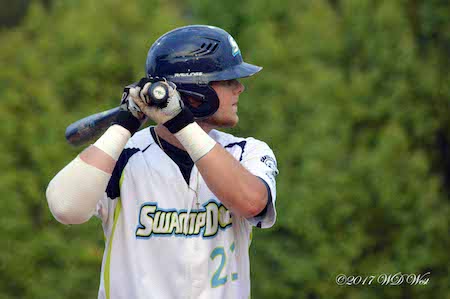 The Fayetteville SwampDogs (19-10) followed a familiar script when facing the Wilmington Sharks (13-16) giving up early runs to the Fins before coming from behind at The Shark Tank.

Wilmington took a 2-0 lead after the first inning as starter Shane Bishop (North Greenville) labored through the first before gaining confidence and control to strike out five in three innings of work.

Justin Hawkins did his best to help his starter homering to left, for a team-best fourth time this season to cut the deficit in half in the 2nd inning.

The Sharks would plate one more run in the third to regain a 2-run advantage. However, the SwampDogs bats would light up Buck Hardee Field in the 5th ensuring Fayetteville’s win streak would stay intact.
Brett Helmbrecht (Coppin State) would start off the inning with a one-out base hit extending his hitting streak to three games. Following a strikeout, the SwampDogs two-out rally magic continued a trend the SwampDogs have been thriving on all season. All-Star Jay Robinson (New Orleans) singled advancing Helmbrecht to second base. Matt Morrow (Wright State) would walk to load the bases before the SwampDogs comeback effort turned into a lead.

Jayson Newman (Cal State Northridge) singled to left field plating two runs and tying up the contest in the fifth. The Dogs weren’t done as a balk plated Morrow and brought Newman to third setting up Hawkins, who didn’t pass up the opportunity to provide some early fireworks for the “Findependence Day” crowd. Hawkins blasted his second home run to the deepest part of the yard putting the SwampDogs on top 6-3.

The Sharks would threaten to spoil the Dogs 4-0 record at the Shark Tank by plating one run and loading the bases in the 9th before Jayson Newman took the mound from right field and struck out the final two threats to Fayetteville’s perfect record in Wilmington.

Newman earned his first save of the year, while Micahel Lozano (Cypress College) took his second win of the season following one inning of work in the fourth to improve to (2-0). Daniel Johnson (Charleston Southern) was handed his second loss of the year but remains an impressive (4-2) for the Sharks this season.

The SwampDogs return to the Swamp on Monday for their fireworks spectacular game against the Edenton Steamers. For all your SwampDogs news and updates please visit GoSwampDogs.com and follow us on Twitter @GoSwampDogs. The SwampDogs season is presented by Fayetteville Kia.