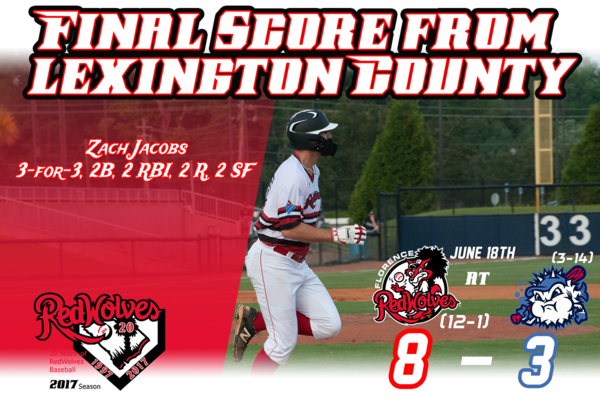 With lightning striking in the distance and the rain holding off, Rian Haire picked up his first win while striking out a career high eight, with the assistance of the Florence RedWolves’ offense cranking 13 hits. The RedWolves battered the Lexington County Blowfish 8-3 on Father’s Day Sunday at Lexington County Baseball Stadium on the way to their 12th win.

The Florence RedWolves (12-1) held a 4-0 score when they broke loose for a three-run eighth to put the icing on the cake. Tyler Webb, Masen Hibbeler and Zach Jacobs each singled to begin the inning. With the bases loaded and two outs, Riley King reached on an error that allowed Webb to score, putting the RedWolves up 5-0. The next batter Jim Wagner, reached on an infield single which plated Hibbeler pushing the Florence lead to 7-0 over the Lexington County Blowfish (3-14).

Rian Haire (1-0) earned his first win of the season in his third start. The left-hander out of the University of South Carolina tossed a season high 5.2 innings and struck out a season best eight batters, while relenting just three hits on the night.

Florence opened the scoring in the top of the first inning that was jump started with a one-out triple to right center off the bat of Masen Hibbeler (2-for-5, 3B, 2 R). Zach Jacobs (3-for-3, 2B, 2 RBI, 2 R) hit a sacrifice fly to give the RedWolves the 1-0 lead.

In the top half of the fourth inning Florence pushed three runs across on Blowfish starter Charlie Hecht (0-2). Jacobs, Matt Beaird and King all singled in the inning. King’s base hit drove in Jacobs putting the away team up 2-0. After Wagner was hit by a pitch, Brandon Chapman ripped a two-RBI single of his own into left field to make it 4-0.

Lexington County tried to make the game interesting in the bottom of the eighth inning, but failed to capitalize further than scoring three runs. The RedWolves used three pitchers in the inning to escape the trouble. With two outs, Lexington County’s Connor Durden and JT Stone singled to left off of reliever James Williams, which brought a pitching change from the RedWolves. After three walks and a passed ball the Blowfish scored three runs.

Florence added an eighth run in the top of the eighth on a second sacrifice fly from Jacobs. Storme Cooper and Webb both singled to open the frame. Jacobs lifted the sacrifice fly to right, scoring cooper to make it 8-3.

The Florence RedWolves will return home on Monday, June 19th to face off with the Blowfish again in a double header at Sparrow Stadium slated for a 6pm start. Visit www.florenceredwolves.com for tickets and information.