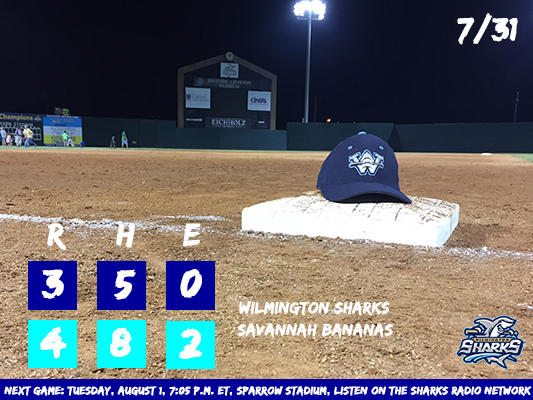 For the first time since July 13th at home against Fayetteville, the Sharks suffered a defeat. Wilmington’s longest win streak was eight straight during the 2005 season, but the new record stands at 10 in a row.

The Bananas knocked off the Sharks 4-3 in the second meeting between the two teams. Despite a quality start from Daniel Johnson, the visitors’ bullpen was unable to close it out.

Savannah (25-21) was on the board first against the Sharks. Daniel Johnson allowed a solo home run to John Cassala with one out in the top of the second inning.

Wilmington (28-20) answered in the top half of the third inning. The Sharks loaded the bases with one out and Luke Morgan coming to the plate. The shortstop from the College of Charleston dropped a single into right field to give Wilmington the 2-1 lead.

In the top of the fifth, Wilmington added to its lead. Justin Dean reached base for the second time, singling with one out. The center stole second base and was in scoring position with Luke Morgan at the plate and two outs. Morgan singled back up the middle this time to put the Sharks on top 3-1.

With a two run lead, Daniel Johnson came back out for the 5th inning. The southpaw struck out the side on 16 pitches on his way to nine strikeouts on the evening.

However, the Bananas were able to pull a run back in the 6th. Christian Hollie doubled with one out. Then, Matthew Pita followed with a second double with two outs to drive home Hollie. After the sixth, Johnson night ended allowing two earned runs on three hits, two walks and nine strikeouts.

In the seventh, the Sharks turned the ball over to Ryan Hall (0-1) out of the bullpen. The junior allowed three hits on 10 pitches and loaded the bases with one out. Hall was replaced by his Presbyterian College teammate Colt Springs. The righty allowed a base hit into left field. The ball just snuck under the diving glove of Michael Sandle. The tying run scored on the play, but on the relay Luke Morgan threw out the go-ahead run at the plate. The next batter, Christian Hollie singled back up the middle to take a 4-3 lead before Colt Springs struck out Bryce Fischer to end the 7th inning.

Starting pitching was the key to the game for the Bananas. From the end of the 5th to the final out, Bryan Cruse (7-1) retired 13 of the last 14 Sharks he faced. Cruse finished his complete game with three runs allowed, two earned, five hits, two walks and seven strikeouts. The Bananas starter also hit Thatcher Coleman in the 9th inning.

The loss drops the Sharks to 15-5 in the second half, 28-20 overall and ends the longest winning streak in franchise history at 10 game. Wilmington’s record for the month of July was 16-5.

Wilmington is on the road again tomorrow to face the Florence RedWolves for the third time this season. First pitch is at 7:05 from Sparrow Stadium on the campus of Francis Marion University. Coverage starts at 6:50 on the Wilmington Sharks Radio Network.