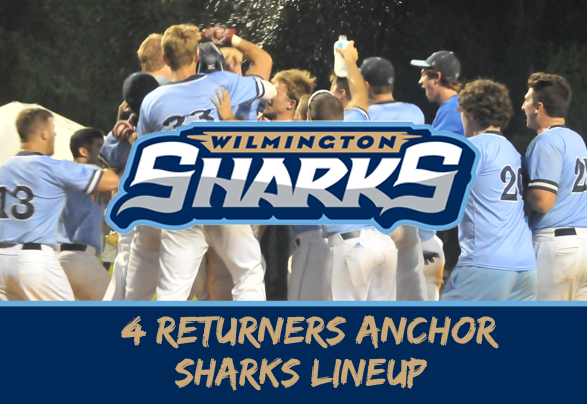 Four Sharks are making their way back to Wilmington for the 2018 season.  One returner from the 2016 team joins three members of the Sharks 2017 East Division Championship squad. Danny Wondrack, Dan Wilson and Ward Coleman are all back for their second stints in Wilmington. Meanwhile, Chris Graham makes his return to the Port City.

With one out and a runner on first, Sharks DH Danny Wondrack stepped to the plate. It was the ninth inning of Game 2 against the Edenton Steamers in the East Division Championship.  The College of Charleston catcher came up with his biggest hit of the summer, launching a walk-off two run home run down the left field line.

Now, with another year of experience under his belt, Wondrack is looking to take that next step and win a title in Wilmington. “Winning the Petitt Cup is all about whoever is the hottest team,” said Wondrack. “I’m excited to be back in Wilmington this summer.”  So far this season for the College of Charleston, Danny Wondrack is hitting .267 and has a team high 10 home runs and is second on the team with 25 RBI.

Dan Wilson also makes his return home for the 2018 summer. The Topsail High School graduate is in his third season playing collegiately at UNC-Asheville. This season for the Bulldogs, Wilson is hitting .250 in 23 starts in the field. A two-way player, Wilson has also made three starts and three appearances out of the bullpen.

The third, and final veteran from a year ago is Wilmington native Ward Coleman. The New Hanover High School graduate returns to Wilmington for his third summer with the Sharks. Coleman turned a .228 average in 2016 into a .292 average last season at the Shark Tank.  “I’m excited to be back in Wilmington because I get to be home and play in the incredible environment that the Shark Tank has been building,” says Coleman.

This season for the Davidson Wildcats, the Wilmington native is hitting .284 with 3 home runs and 23 RBI in 27 starts. The 2018 will be the 7th season that Ward Coleman can call the Shark Tank his home. The Sharks infielder started all fours years in high school for New Hanover and will be in a Sharks uniform for the third season.

The final Sharks returner for the Sharks this season last played for Wilmington in 2016. Chris Graham started 31 games for the Sharks two summers ago, tallying a .304 average and stole seven bases.  “I am most excited about playing in the Shark Tank again in front of all the great fans,” says Graham. “When I played a few summers ago it was hands down the best environment that I have ever played in.” Chris Graham said he brings speed, energy and whatever the team needs to succeed this summer.

The Sharks next roster announcement is Monday, April 9th.