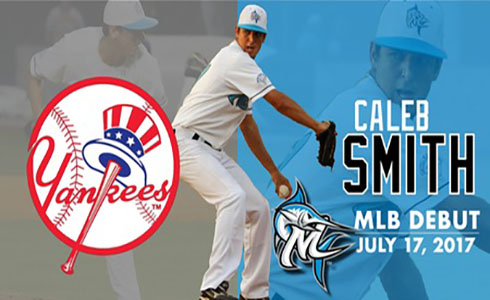 “We are thrilled for Caleb and his family about his MLB Debut last night with the Yankees,” Marlins owner Buddy Bengel says. “Our organization is proud that Caleb is our 5th MLB player and we wish him a long big league career.

Smith started the 2017 season with the Trenton Thunder (AA Affiliate) before being moved up to the AAA level with the Scranton/Wilkes-Barre Rail Riders on April 13. Smith was stellar at the AAA level this season, tallying a 2.07 ERA in 87 innings pitched with 86 total strikeouts, earning his call-up to the big leagues.

He marks the 106th overall former CPL player to make his major league debut, and the 12th this season. His debut also pushes the Marlins major league alumni total to 5.