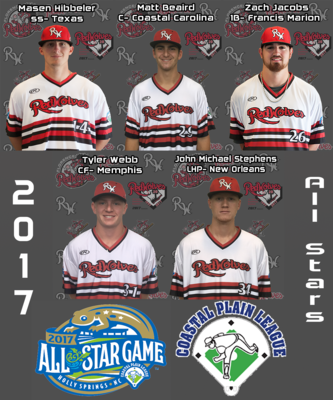 For the 19th consecutive year the Coastal Plain League will host its All-Star Game featuring the top players from within the league. This summer Masen Hibbeler, Matt Beaird, Zach Jacobs, Tyler Webb and John Michael Stephens have been chosen to represent Florence for the event.

Of the five players, four are position players, while Stephens is the lone pitcher. Notably, Hibbeler, Webb and Jacobs have been selected as starters for the game.

Hibbeler has been the staple in Florence’s middle infield thus far in 2017 and will be the starting shortstop for the West Division. Out of Odessa College and transferring to the University of Texas in the fall, Hibbeler is batting .289 in 21 games played with 13 runs scored, 10 RBI, five doubles, a triple and four stolen bases. The Florence shortstop has displayed the unthinkable defensively and produced considerably at the plate.

Matt Beaird will join the team as one half of the battery, being the signal caller from behind the plate. A catcher from the 2016 national championship Coastal Carolina University program, Beaird has put together a .375 / .419 / .600 slash line through his first 12 games with the RedWolves. In 40 at bats he has 15 hits, eight runs, six runs batted in, three doubles and two home runs.

Zach Jacobs earns the starting spot at first base for the West providing a power bat and solid defense. A junior transfer to Francis Marion University, Jacobs is batting .349 through 24 games with 16 runs scored, nine doubles, 18 RBI and four home runs. Most notably he is near the .420 mark with runners on base with two outs.

Tyler Webb will be joining the position players as he roams the outfield for Florence. From the University of Memphis, Webb is the centerfielder for the RedWolves and will be starting in that position in the All-Star Game. Through 15 games Webb holds a .292 batting average in 72 at bats, with 21 hits, 14 RBI, two triples, one home run, a double and seven stolen bases.

John Michael Stephens rounds out the five-player set for the RedWolves making the team as the only Florence pitcher to be selected. A 6-foot-8 left-hander out of the University of New Orleans, Stephens has allowed just three runs in 17.2 innings on the mound. With a 2-0 record and a 1.53 ERA, John Michael has walked just two batters, while striking out 15 in 62 batters faced. Stephens is holding opponents to a .210 batting average and has relented 13 hits in five appearances and one start with one save.

The 2017 Coastal Plain League All-Star Game will be played on Monday, July 10th at 7:00 p.m at the North Main Athletic Complex in Holly Springs, N.C. The game will be broadcast live in over 25 million homes as well as to be streamed on MLB.com vis the CPL’s partnership with 7 Communications.

Visit www.coastalplain.com for tickets and information.