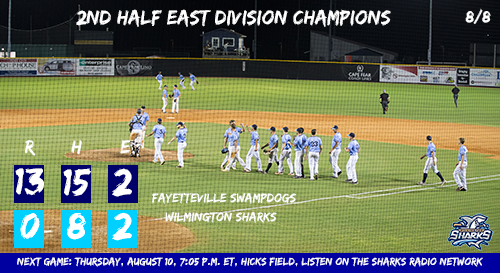 The Sharks are headed back to the East Division Championship Series for the second time in three years. Wilmington (1-0) defeated Fayetteville (0-1) 13-0 at J.P. Riddle Stadium.  The Sharks scored three runs in each of the first two innings and homered three times against the SwampDogs. #3 Wilmington advances to face #4 Edenton in a best of three series to advance to the Petit Cup Championship Series.

In the first, Justin Dean led off the inning with a single back up the middle. After advancing to second, Luke Morgan singled to right field to put the Sharks on the board first. On the ensuing pitch, Trevor McCutchin clobbered his sixth home run of the summer to right field.

Wilmington added three more in the second. Ward Coleman singled to lead off the inning and with one out Cam Locklear was walked on five pitches.  Justin Dean, Michael Sandle and Luke Morgan rattled off three straight RBI singles off of starter Josh Hejka. After just an inning and a third, Hejka had allowed six runs on seven hits and was pulled from the contest.

The Sharks tacked on another run in the third. Dayton Dugas crossed home when Justin Dean reached on an error by Justin Hawkins to put the visitors on top 7-0.

In the sixth, Wilmington added four more with one out in the inning. Michael Sandle and Luke Morgan both singled through the left side. Trevor McCutchin picked up his third RBI of the night on another single into left field that scored Sandle. Then, Brian Parreira launched the Sharks second home run of the night, a towering shot down the right field line, to put Wilmington on top 11-0.

The Sharks added two more on a two-run home run by Michael Sandle in the top half of the ninth it. The blast was Sandle’s second of the summer.

Wilmington is off on Wednesday, before Game 1 of a three game series with Edenton. The Sharks are on the road at #4 Edenton on Thursday. First pitch from Historic Hicks Field is at 7:05. Coverage begins at 6:50 on the Wilmington Sharks Radio Network.