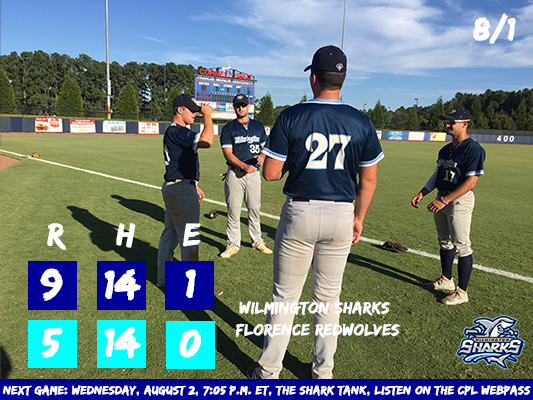 After failing to score in the first inning against Savannah, the Sharks hit back hard against the RedWolves. Wilmington (29-20) scored four runs on five hits in the first inning off of Florence (23-25) starter TJ Clark (0-4). The visitors cruised to the 9-5 victory to pull even with Fayetteville atop the East Division.

In the first inning, Justin Dean singled and then scored on a double by Luke Morgan to the gap in right center field. With two outs, Brian Parreira singled home Morgan and advanced to second on the throw home. On the very next pitch, Danny Wondrack laced a ball over the third baseman’s head down to the left field score to put the Sharks up three. Ward Coleman then poked a single through the right side to score Wondrack. Three of the first four runs for Wilmington came with two outs.

In the fourth, Luke Morgan drove in Justin Dean for a second time on a single into left field. The College of Charleston junior has five RBI in his last two contests and is tied for second in the CPL with 44 on the summer. Florence answered in the bottom of the inning. Logan McRae hit his fourth home run of the summer to lead off the frame.

In the sixth, the Sharks added another run. On a 3-0 count, Cam Locklear hammered his fourth home run of the summer to straight away left field. In the bottom of the inning, Florence scored twice on back-to-back RBI singles by Connor Howell and Jim Wagner to cut the deficit to three.

Thatcher Coleman hit his 4th home run of the season as well in the top of the 7th. The solo shot came with two outs to restore Wilmington’s four run advantage.

The visitors added two more runs in the 8th inning off of the RedWolves’ bullpen. Wilmington loaded the bases with no outs. Brian Parreira grounded into a fielder’s choice that scored Michael Sandle for his second RBI of the night. The next batter, Danny Wondrack, hit a sacrifice fly to score Luke Morgan, which put the Sharks on top 9-3.

In the bottom of the ninth, Florence only managed two runs off of Mitch Spence, coming up short in the comeback bid.

The win pulls Wilmington into a tie for first place with Fayetteville atop the East standings. The Sharks are 29-20 overall, while the SwampDogs are 30-21. Wilmington is now 16-5 in the second half.

The Sharks take on the SwampDogs Wednesday night at home, winner holds sole possession of first place. First pitch is at 7:05 from the Shark Tank. Coverage starts at 6:50 on the CPL Webpass.