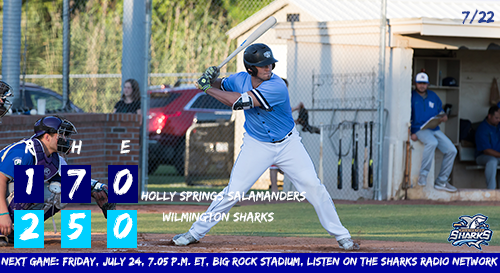 In the bottom of the 3rd, Johnson got all the run support that he would need. Wilmington scored on Justin Dean’s RBI ground out after Ward Coleman, Ben Highfill and Dan Wilson loaded the bases with 2 walks and a single. Then with runners on the corners, Salamanders start Jake Lewis balked home the Sharks second run.

The visitors responded with a lead off solo home run by Adam Sisk in the 4th inning. Sisk would be the final player to reach home safely.

With 2 on and 2 out in the top of the 8th, Ryan Hedrick came on to strikeout Sisk to end the Salamanders threat. Then in the top of the 9th, Hedrick allowed a leadoff double to Jacob Jaye who then reached third with just one out. The junior from Presbyterian worked back-to-back groundouts to leave the tying run 90 feet away.

Daniel Johnson was the winning pitch, while Jake Lewis (1-2) lost for Holly Springs. The save was Ryan Hedrick’s second of the season.

Wilmington is off tomorrow and travels to Morehead City on Monday.  First pitch from Big Rock Stadium is at 7:05.  Coverage begins at 6:50 on the CPL Webpass.