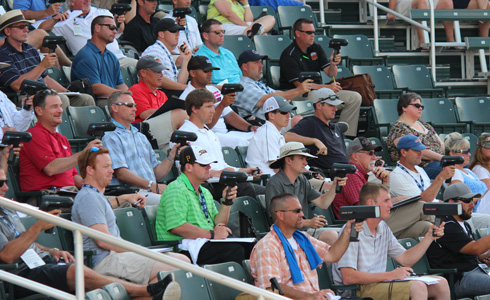 The Coastal Plain League struck first against the USA Collegiate National Team (CNT), but ultimately could not hang on for the win, losing 4-2 on Sunday June 22.

It was the first-ever meeting between a Select Team from the CPL and the CNT; and considering all the talent that highlighted both rosters, it is no surprise that there were over 50 major league scouts and cross checkers in attendance.

Peninsula’s Taylor Ostrich (Old Dominion) got the first hit of the game for the CPL on a single to left with two outs. Next up was Hunter Bryant from the Forest City Owls, who promptly drove Ostrich in on a double to put the CPL up 1-0, headed to the bottom of the first inning.

Morehead City’s Cal Quantrill (Stanford) got the start for the CPL and struck out two in the inning, but also allowed a run on a double from Alex Bergman (Louisiana State) to score D.J. Stewart who singled to lead off the inning.

The CPL threatened again in the top half of the second against CNT pitcher Andrew Moore (Oregon State), but Fayetteville’s Norm Donkin (Delaware) was ultimately thrown out at home after trying to score from second on an infield single by Wilmington’s Steven Linkous (UNC Wilmington).

Zac Collins (Miami) led off the bottom half of the second for the CNT with a double to deep center field. A Tate Matheny (Missouri State) walk and Sheldon Neuse (Oklahoma) sac-bunt pushed runners into scoring position for Kevin Newman (Arizona) who drove in a run on a groundout to the shortstop, putting the CNT up 2-1 after two innings of play. The CNT scored again in a similar fashion in the third, with D.J. Stewart (Florida State) grounding out to shortstop scoring Christian Stewart (Tennessee) who doubled to lead off the inning, pushing to score to 3-1.

The scoring halted for an inning before both teams tacked on runs in their respective half of the fifth inning. The CPL scored on a leadoff triple from Chris Robinson (Morehead State) and a throwing error by the CNT’s center fielder that allowed Robinson to make it all the way around for a run.

Unfortunately the 3-2 score did not last for long, as Blake Trahan (Lousiana-Lafayette) led off the inning for the CNT against new pitcher, Peninsula Pilots’ Brandon Vick. Trahan would eventually come around to score on a Bergman sac-fly giving the CNT a 4-2 lead.

Neither team managed another run, and despite a leadoff single from Petersburg’s Justin Novak in the top of the ninth, the CPL could not put together a comeback.

The CPL Select team managed six hits versus the CNT’s seven, and played errorless baseball compared to CNT’s three errors. Six different players recorded a hit for the CPL Select Team with Robinson and Bryant knocking in the team’s two extra-base hits. Quantrill was given the loss for the CPL after a final line of two innings, two earned runs allowed and three strikeouts, while the CNT’s Moore earned the win after three innings of work, allowing one run and striking out three. Neuse (Oklahoma) came on in the ninth for the CNT to notch the save.

This marked the first game of an eight-day USA Baseball Tour throughout the CPL presented by Baseball America. Tomorrow the CNT heads to High Point-Thomasville to face the HiToms. The next day (June 24), the team will travel to Fayetteville for a game with the SwampDogs. On June 25, the tour will take the Collegiate National Team to Wilson to face the Tobs, followed by a game on June 26 against the Columbia Blowfish. The Florence RedWolves will host the next stop on June 27, and then the tour shifts to Morehead City for a contest with the Marlins on June 28; and concludes on June 29 in Hampton, Va., versus the Peninsula Pilots.

About the Coastal Plain League:
The Coastal Plain League is the nation’s hottest summer collegiate baseball league. Celebrating its 18th season in 2014, the CPL features 14 teams playing in North Carolina, South Carolina and Virginia. The CPL gives college players the chance to refine their skills with the use of wooden bats. Players are housed with local host families for the summer and past experiences have been very positive for both players and hosts. Further more, the CPL has had over 1,200 alumni drafted and 68 alums – including 2011 AL MVP and Cy Young winner Justin Verlander – make their Major League debut thus far; while another notable alum – Russell Wilson – won Super Bowl XLVIII. For more information on the Coastal Plain League, please visit the league website at CoastalPlain.com, and be sure to friend us on Facebook (at www.facebook.com/coastalplainleague) and follow us via Twitter (as CPLBaseball).