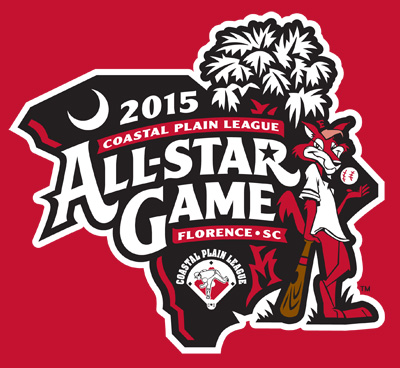 The Coastal Plain League announced this afternoon that the Florence RedWolves have been awarded the 2015 CPL All-Star Game. The 17th annual All-Star event will make its second-ever trip to Florence, S.C., but its first to beautiful Cormell Field at Sparrow Stadium on the campus of Francis Marion University. The dates are set for July 12-13, 2015.

“It is with great pleasure that we award the 2015 Coastal Plain League All-Star Game to the Florence RedWolves,” said CPL Commissioner Justin Sellers. “Our All-Star Game has become a circled event on everyone’s calendars each summer; and we look forward to the fun-filled and memorable experience that we know the RedWolves will create in 2015.”

The event will kick off with the CPL All-Star Fan Fest and Home Run Derby on Sunday, July 12. Fans will have the opportunity to interact with the All-Stars during the Fan Fest, as well as other activities to be announced, before watching both the East and West All-Star teams square off in the Home Run Derby. The All-Star luncheon will be held on Monday, July 13 with a special guest speaker, followed by a Major League style scout day for the All-Star participants. Finally, the main event – the 2015 CPL All-Star Game – will take place that evening.

“We are thrilled that the Coastal Plain League has honored the RedWolves organization by awarding us the 2015 CPL All-Star Game,” said RedWolves owner Kevin Barth. “The RedWolves have wonderful fans and strong community support as well as the pleasure of playing in one of the nicest facilities in the country. We look forward to the opportunity to show the nation’s best players, coaches, and families some Southern hospitality – Florence style.”

The new 2015 CPL All-Star Game logo was designed by Skye Design Studios (www.sdsbranding.com), a brand identity and design firm located in the greater New York City area. Skye Design Studios has also been responsible for designing the 2014 CPL All-Star Game logo as well as the upcoming CPL Petitt Cup Playoffs brand identity that will be announced the first week of August.

“All-Star identities are an opportunity to showcase both the league and host city as a destination event for fans each summer,” said Skye Dillon, owner of Skye Design Studios. “Collaborating with Kevin and Justin provided us with perspectives from both the RedWolves and CPL which we were able to incorporate into the final mark. The logo combines the RedWolves mascot with iconic symbols of South Carolina – the palmetto tree and crescent moon. A single star – located in the ‘R’ of “All-Star” – is placed over Florence, the host city in 2015.”

More details will be released throughout the offseason and heading into the 2015 CPL season. For tickets or more information on the 2015 Coastal Plain League All-Star Game, please contact the Florence RedWolves office at (843) 629-0700 or online at www.florenceredwolves.com, or visit the CPL at www.coastalplain.com.

About the Coastal Plain League:
The Coastal Plain League is the nation’s hottest summer collegiate baseball league. Celebrating its 18th season in 2014, the CPL features 14 teams playing in North Carolina, South Carolina and Virginia. The CPL gives college players the chance to refine their skills with the use of wooden bats. Players are housed with local host families for the summer and past experiences have been very positive for both players and hosts. Further more, the CPL has had over 1,200 alumni drafted and 72 alums – including 2011 AL MVP and Cy Young winner Justin Verlander – make their Major League debut thus far; while another notable alum – Russell Wilson – won Super Bowl XLVIII. For more information on the Coastal Plain League, please visit the league website at CoastalPlain.com, and be sure to friend us on Facebook (at www.facebook.com/coastalplainleague) and follow us via Twitter (as CPLBaseball).