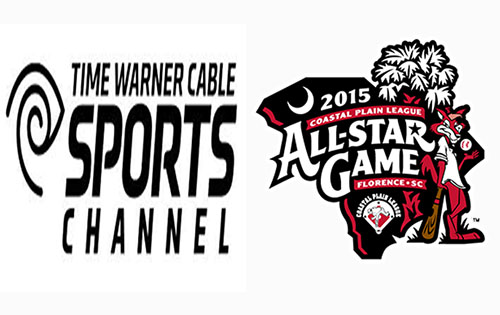 The Coastal Plain League announced today that the 2015 CPL All-Star Game in Florence, S.C., July 13, will be broadcast live on the Time Warner Cable SportsChannel and streamed online at www.coastalplain.com.

“We are excited to partner with Time Warner Cable SportsChannel to televise our 2015 CPL All-Star Game live to our fans,” said Justin Sellers, Coastal Plain League Commissioner. “The CPL and its member franchises are constantly looking for new ways to strengthen our brand and grow our fan base, which this definitely will do. Now, our players and coaches will benefit from the added exposure the CPL offers through it’s partnership with TWC; and for our families and fans that aren’t able to attend our All-Star Game in person, they now can enjoy watching our premier event live from the comfort of their own homes.”

This will be the first year of a multi-year deal and marks the first time the CPL All-Star game will be on television since the 2001 season, when the game was held in Edenton, N.C. Fans will be able to watch the game live via the Time Warner Cable SportsChannel (channel 323) or stream it live online at www.coastalplain.com. First pitch is set for 7:15 p.m.

“Summer is the season for baseball and we know how much our viewers love the national past time,” said Jason Lockhart, General Manager of Time Warner Cable SportsChannel. “We are excited to televise the Coastal Plain League All-Star game to baseball fans across the Carolinas.”

Chris Edwards, the Director of Broadcasting for the Coastal Plain League, will serve as the games play-by-play broadcaster while fellow CPL alum Erin Summers has been tabbed as the sideline reporter for the game.

About the Coastal Plain League:
The Coastal Plain League is the nation’s hottest summer collegiate baseball league. Celebrating its 19th season in 2015, the CPL features 15 teams playing in North Carolina, South Carolina and Virginia. Furthermore, the CPL has had over 1,250 alumni drafted and 79 alums – including former AL MVP and Cy Young winner Justin Verlander – make their Major League debut thus far; while another notable alum – Russell Wilson – won Super Bowl XLVIII. For more information on the Coastal Plain League, please visit the league website at CoastalPlain.com, and be sure to friend us on Facebook (at www.facebook.com/coastalplainleague) and follow us on Twitter @CPLBaseball.