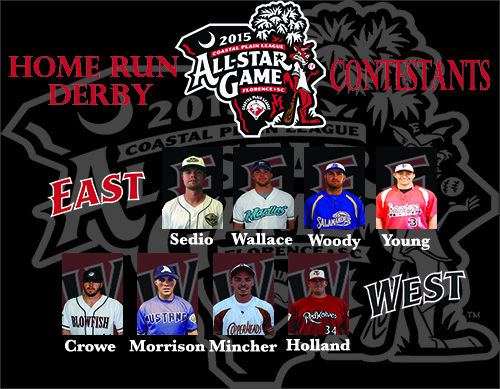 The derby will consist of four hitters on each of the East and West CPL All-Star teams and will have three rounds of competition.

Representing the East squad are CPL home run leaders Chad Sedio of Edenton and Morehead City’s Stephen Wallace with ten each, followed by Collin Woody of Holly Springs with six and GK Young of Petersburg with five. For the East, J.D. Crowe of Lexington County starts off the list with five home runs with Hank Morrison of Martinsville coming in with four. Rounding out the West contestants will be Asheboro’s Ryan Mincher with four and Ben Holland of the host team Florence RedWolves with two.

Championship Round: Top East hitter vs. Top West hitter
-Hitters start from zero with hitter who has the highest number of points from home runs hit being crowned the 2015 CPL All-Star Home Run Derby Champion

About the Coastal Plain League:
The Coastal Plain League is the nation’s hottest summer collegiate baseball league. Celebrating its 19th season in 2015, the CPL features 15 teams playing in North Carolina, South Carolina and Virginia. Players are housed with local host families for the summer and past experiences have been very positive for both players and hosts. Furthermore, the CPL has had over 1,200 alumni drafted and 79 alums – including former AL MVP and Cy Young winner Justin Verlander – make their Major League debut thus far; while another notable alum – Russell Wilson – won Super Bowl XLVIII. For more information on the Coastal Plain League, please visit the league website at CoastalPlain.com, and be sure to friend us on Facebook (at www.facebook.com/coastalplainleague) and follow us via Twitter (as CPLBaseball).