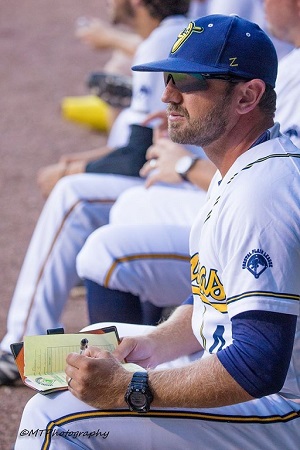 The Savannah Bananas are excited to announce that Sean West, head coach of the 2016 Bananas, will be returning for the 2017 season. West led the Bananas to a 30-20 record and the Coastal Plain League Championship in the team’s inaugural season.

“We are thrilled to welcome back Coach Sean West,” said President Jared Orton. “What he was able to accomplish in the team’s first year was nothing short of amazing.  He’s a true class act, who has tremendous respect from the players and the entire staff.  We are lucky to have him and can’t wait to have him back in the Savannah community for the summer.”

West is currently an assistant coach and recruiting coordinator at the University of Texas at Dallas. He has several years of experience in summer collegiate baseball in the Coastal Plain League, as well as the Great Lakes League and the prestigious Cape Cod League.

The 2016 CPL Championship was the second championship win in West’s coaching career. He was an assistant coach for the 2013 winners of the Cape Cod League Championship, the Cotuit Kettleers.

The Stone Mountain, GA native is excited to spend a second summer in Savannah with his wife, Kristen, and son, Tripp.

“After a story book inaugural year, we look forward to submerging ourselves into one of the best cities in the country. We fell in love with the people, the food, the charm, the history, and most importantly, Savannah’s super fans at historic Grayson Stadium,” West said. “We feel truly blessed for this opportunity and look forward to having our newborn, Tripp, spend his first summer in existence in such a special place!”

West is already optimistic about the potential for 2017, saying “my roster is full and I am extremely excited with the level of talent coming back next summer.”

The Bananas have already begun selling memberships for the 2017 season. There is a waitlist for full-season box seats. Five game, ten game, and general admission full season memberships are on sale now. More information can be found at thesavannahbananas.com or by calling (912) 712-2482.