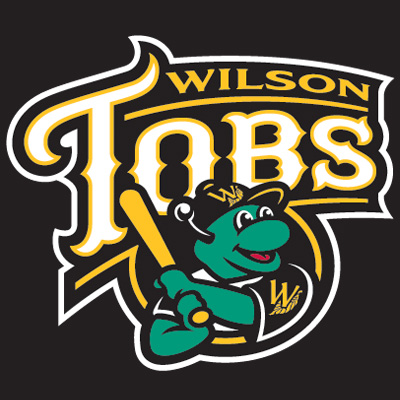 The Tobs were unable to truly kickstart the offense on Tuesday night in Holly Springs, as the Salamanders won the game at Ting Stadium by a score of 7-1.

The Tobs’ only run Tuesday came from an RBI groundout by Carson McCurdy (Mount Olive) in the top of the fourth inning, scoring Dawnoven Smith (NC A&T). Smith was the only Tob with a multi-hit game, with singles in both the first and fourth innings.

Off of Tobs starter Will Edwards (Chowan), the Salamanders scored two in the bottom of the first inning, when Adam Sisk (James Madison) hit a two-run home run to left to open the score at 2-0. Off of Edwards, the Salamanders made it a 4-1 score with two more runs in the bottom of the fifth, when Austin Lafollette (UNCW) and Walker Imwalle (Davidson) came around to score on a Cory Wood (Coastal Carolina) RBI single to right.

For the Tobs, Edwards went six innings, giving up four runs (all earned) on six hits, striking out two and walking four. The southpaw took the loss for the Tobs, dropping to 0-1 on the season.

In the seventh, right-hander Sam Luchansky (Belmont Abbey) came on with the Tobs trailing 4-1. With two walks and an error preceeding in the inning, Salamanders left fielder Dalton Hoiles (Shippenburg) came to the plate with two on and two out, and drove in both runners with a double down the left field line. The next man up, first baseman Dominick Cammarata (UNC Charlotte) drove in Hoiles with an RBI single to left center to make it a 7-1 game. After allowing three runs in 0.2 innings, Luchansky was pulled in favor of Henry Cartrett (USC-Aiken).

Cartrett got the final four outs for the Tobs, pitching 1.1 scoreless innings without giving up a hit, walking one.

The Tobs are back in action Wednesday night with a trip to Hampton, Virginia to take on the Peninsula Pilots. First pitch is set for 7pm.