Bananas Rally for Walk Off Win Against RedWolves 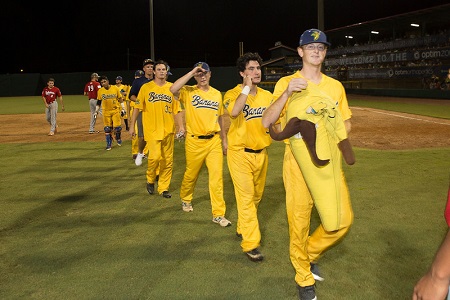 The RedWolves got on the board first in the top of the 4th with a home run to left field by Logan McRea (College of Charleston). The home run was one of only two hits that pitcher Elliot Forde (Misericordia) allowed. The Bananas answered immediately in the 4th with a RBI single from UGA’S LJ Talley.

The teams remained neck and neck for the majority of the night, each plating a single runner in the 6th to tie the game 2-2. The Bananas’ second run of the night was also driven in by Talley.

Bryce Fischer (Oklahoma State) kicked off the bottom of the 10th with a double to the left center gap. Jacob Southern was then intentionally walked. LJ Talley then flew out to left center for the first out. With two Bananas on, the stage was set for Nelson who singled down the left field line to beat RedWolves in walk off fashion.

Phillips earned the win for the Bananas, his fourth of the season.

The Bananas with back-to-back wins, have clinched a spot in the 2017 CPL playoffs and are currently the three seed with a 29-24 record. The Bananas host the Grizzlies tomorrow at 7pm for their 26th sold out game of the season. Fans guarantee playoff tickets at thesavannahbananas.com or by calling 912-712-2482.