9th Inning Comeback Leads to RedWolves Walk off over Blowfish 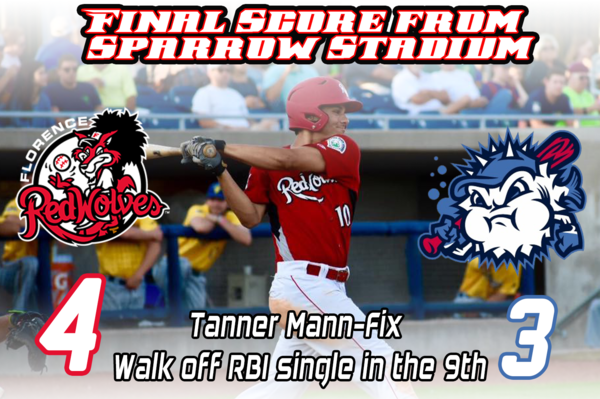 FLORENCE, S.C.- With one out and the bases loaded in the bottom of the ninth tied at 3-3 with the Lexington County Blowfish, Tanner Mann-Fix stood in and drove home the winning run to give the Florence RedWolves their first walk off victory of the season, beating the Blowfish 4-3 Friday night at Sparrow Stadium.

Cornell Nixon lead the charge driving a hard-hit double right down the left field line. William Thomas though couldn’t handle the ball rattling off of the padding, allowing Nixon to move to third on the error. Grayson Cottingham in his second game as a RedWolf and his first game at home, provided the game-tying hit, scoring Nixon on a fly ball to centerfield to cap off a three-hit night for the Florence native. Jim Wagner followed with a hard ground ball up the middle, just off of the outstretched glove of Marshawn Taylor at short, putting runners on the corners. Lexington County then intentionally walked Zach Jacobs to get to Clay Casey. Casey grounded back to the pitcher James Townsend Chase (2-1) that threw home to get the lead runner. With one out and the bases loaded, Tanner Mann-Fix lined a ball to centerfield, in his first hit of the night, that scored Wagner from third easily giving the RedWolves a 4-3 victory.

Lexington County took the lead in the top of the ninth inning on an RBI single from Taylor. Mickey Dugan led off the inning with a double to left. With one out, Taylor hit a ball to centerfield that was deep enough to score Dugan from first to take a 3-2 lead.

In the bottom of the eighth inning Florence trailed 2-0 with two outs and a runner on second, until Logan McRae belted his first home run of the summer to tie the game 2-2.

The Blowfish extended their lead by a run in the top of the fifth inning from a run-scoring single by Drew Ellis. With one out Taylor beat out an infield single and moved to third after a double by Austin Wilhite. After a strikeout, Ellis hit the RBI single to right to move the score to 2-0.

Lexington County drew first blood scoring a run on an RBI base hit from Wilhite. Dugan worked his way on base on a wild pitch after swinging and missing at a ball in the dirt. After two ground outs moved Dugan to third, Wilhite’s single to right scored Dugan to give Lexington County a 1-0 lead.

Alex Nelms made his first start for Florence, throwing 5.2 quality innings, relenting two runs, two earned, on nine hits, a walk and four strikeouts. Jalen Latta and Isaac Rodgers both came in for an inning of relief. Latta struck out the side, as Rodgers fanned a batter as well. Jack Henry Beasley (1-2) entered in the ninth and gave up a run on two hits, a walk and two strikeouts.

The RedWolves will travel to Fayetteville on Saturday and to Martinsville on Sunday. Visit www.florenceredwolves.com for more information and tickets.