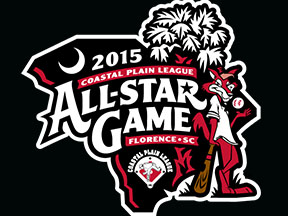 After a late-inning comeback by the West Division All-Stars, the 2015 Coastal Plain League All-Star Game ended in a 4-4 tie July 13 at Sparrow Stadium in Florence, S.C.

There was a bit of rain at the outset pushing the start back to 8:45 p.m., with league officials deciding to shorten the game to eight innings due to time contraints. Trevor Gay (High Point-Thomasville / Charlotte) started on the mound for the West and Zach Prendergast (Edenton / Seton Hall) for the East.

From there pitchers on both sides settled for the next few innings before Chaz Pal (Florence / USC Aiken) smashed a home run to left giving the West their first run of the game.

The score held there until the bottom of the eighth and final inning when the West Division All-Stars rallied for three runs to tie the game at 4-4. Hank Morrison (Martinsville / Mercyhurst) drove in the tying run for the West and the game ended in a tie as all available pitchers had been used.

The Offensive Player of the Game award went to Nick Lustrino of the Peninsula Pilots, after finishing 2-for-2 with two runs batted in, one stolen base and one run scored for the winning East team. Taking home Defensive Player of the Game honors was David Bednar of the Edenton Steamers and Lafayette College pitching a one-two-three innings in his one inning of play while striking out two.

About the Coastal Plain League:
The Coastal Plain League is the nation’s hottest summer collegiate baseball league. Celebrating its 19th season in 2015, the CPL features 15 teams playing in North Carolina, South Carolina and Virginia. Furthermore, the CPL has had over 1,250 alumni drafted and 79 alums – including former AL MVP and Cy Young winner Justin Verlander – make their Major League debut thus far; while another notable alum – Russell Wilson – won Super Bowl XLVIII. For more information on the Coastal Plain League, please visit the league website at CoastalPlain.com, and be sure to friend us on Facebook (at www.facebook.com/coastalplainleague) and follow us via Twitter (as CPLBaseball).