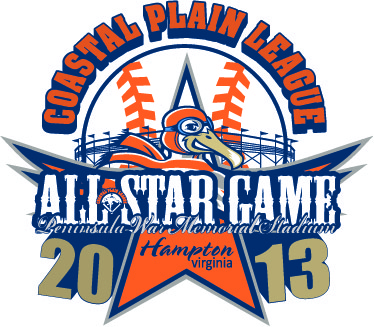 Asheboro’s Donnie Wilson will serve as the head coach of the West Division CPL All-Stars. Wilson led the Copperheads to their first-ever first half championship to start the 2013 season after posting an 18-8 record. Asheboro has won seven of their last 10 games and are currently riding a four-game winning streak as the second half of the season starts today (July 1). The West Division CPL All-Stars assistant coaches will be Jonathan Johnson (Columbia), Blake Walker (Florence), David Tufo (Forest City), Jason Wood (Gastonia), Zach Brown (High Point-Thomasville) and Matt Duffy (Martinsville).

The East Division CPL All-Stars will be led by Edenton’s Bryan Hill. Hill led the Steamers to a league-best 20-6 record in the first half this season and the first half title in the east. The Steamers have won eight of their last 10 games. The East Division CPL All-Star squad assistants will be Darrell Handelsman (Fayetteville), Jamie Sheetz (Morehead City), Hank Morgan (Peninsula), Bob Smith (Petersburg), Ryan McCleney (Wilmington) and Austin Love (Wilson).

The 2013 Coastal Plain League All-Star Festivities will feature several attractions during the two days. During Fan Fest on Sunday, July 7, fans can look forward getting autographs from their favorite CPL All-Stars as well as watching the first-ever All-Star Hitting Challenge. Then, on Monday, July 8, will be the main attraction - the 2013 CPL All-Star Game. Both will be held at the home of the Peninsula Pilots, War Memorial Stadium in Hampton, Va. For ticket information, please call the Pilots at (757) 245-2222 or visit them on the web at www.peninsulapilots.com. To keep up with the latest 2013 CPL All-Star Game news, please go here: http://www.coastalplain.com/page/allstar_2013.