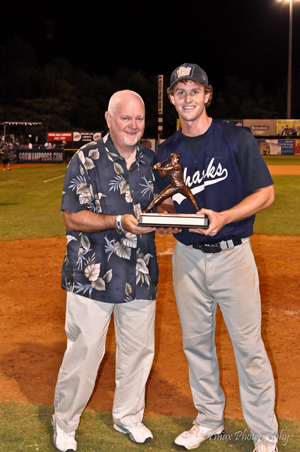 Aldrich, the National Freshman of the Year, also won the 2011 TD Amaritrade Home Run Derby at TD Amaritrade Park in Omaha, Neb., earlier this summer with 14 total dingers.  His father, Charles, who pitched to him in Omaha was also on hand at J.P. Riddle to pitch to Aldrich, and the duo of father and son improved to 2-0 in derbies.
His 18 home runs (16 with wood at 3 points each / 2 with aluminum at 1 point each) tied former Wilmington Shark Dusty Bensko (Illinois), who also hit 18 home runs in the 2004 CPL All-Star Home Run Derby in Florence, S.C.

Aldrich’s biggest challenger was Forest City’s Axel Johnson (TCU). Johnson entered the final round with nine home runs, four behind Aldrich at that point. Giving it a good effort, he was only able to connect on two long balls in the championship round to finish with a total of 11 homers for 33 points.

Despite winning before he took a swing in the championship round, Aldrich decided to put on a show for the fans and both All-Star teams. He didn’t disappoint, belting five home runs – two with aluminum for fun – to round things out.

Below is a complete run down of the 2011 CPL All-Star Home Run Derby:

The Coastal Plain League is the nation’s hottest summer collegiate baseball league. Celebrating its 15th season in 2011, the CPL features 15 teams playing in North Carolina, South Carolina and Virginia. The CPL gives college players the chance to refine their skills with the use of wooden bats. Players are housed with local host families for the summer and past experiences have been very positive for both players and hosts. Furthermore, the CPL has had over 930 alumni drafted and 44 alums make their Major League debut thus far. For more information on the Coastal Plain League, please visit the league website at www.coastalplain.com, and be sure to friend us on Facebook (at www.facebook.com/coastalplainleague) and follow us via Twitter (as cpleague).