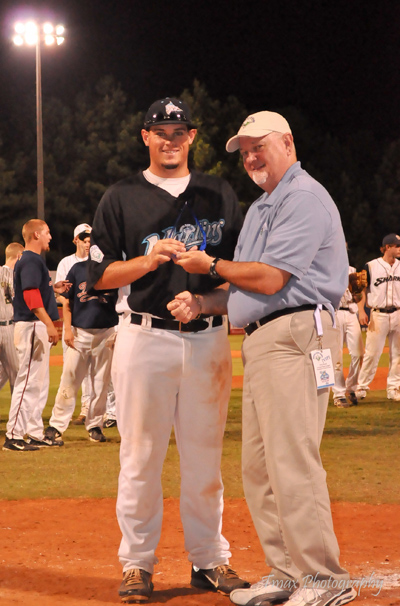 Morehead City first baseman Zach Stephens (Tennessee Tech, pictured right courtesy of Tim McMillan) connected on a deep home run to left in the top of the ninth to score two and give the National Coastal Plain League All-Stars a 3-2 win over the American CPL All-Stars Monday night in front of a crowd of 2,628 at J.P. Riddle Stadium in Fayetteville, N.C.

With the game scoreless in the bottom of the third, Thomasville’s Patrick Koontz (UNC Asheville) led off with a triple to right-center field off Edenton’s Brooks Fiala (Miami of Ohio). One out later, Fayetteville’s Eric Grabe (Tampa) brought Koontz home for the first run of the game off an RBI-single to left. Wilmington’s Jake Mayers connected on a two-out single to short to put runners at first and second for the American squad. Forest City’s Axel Johnson (TCU) then scored Grabe off a RBI-single up the middle, giving the Americans a 2-0 lead after three.

The National All-Stars answered right back in the top of the fourth. Edenton’s Ryan Brenner (Miami of Ohio) walked to lead the inning off. He stole second and then advanced to third on a fly out by Martinsville’s Anthony Nunziato (Lander). With two outs, Morehead City’s Chase McDonald (East Carolina) singled up the middle off of Fayetteville’s Cody Davis (Tampa) to score Brenner and make it 2-1 American All-Stars.

Trailing 2-1 and down to their last three outs in the top of the ninth, the Nationals got on base with a leadoff single by Edenton’s Brian Blasik (Dayton). Then, Stephens hit a bomb to left for two RBIs and to give the National All-Stars their first lead of the game at 3-2.

Wilson’s Tony Wieber (Michigan State) took the mound for the National All-Stars in the bottom of the ninth to try and close the door.  Wieber walked one of four batters he faced, retiring the others to earn the save and seal a 3-2 victory for the National CPL All-Stars.

Sunday night, Wilmington’s Daniel Aldrich (College of Charleston) defeated Johnson in the 2011 CPL All-Star Home Run Derby. Aldrich tied the CPL record for most home runs with 18 for 50 points to be crowned the champion.

The Coastal Plain League is the nation’s hottest summer collegiate baseball league. Celebrating its 15th season in 2011, the CPL features 15 teams playing in North Carolina, South Carolina and Virginia. The CPL gives college players the chance to refine their skills with the use of wooden bats. Players are housed with local host families for the summer and past experiences have been very positive for both players and hosts. Furthermore, the CPL has had over 930 alumni drafted and 45 alums make their Major League debut thus far. For more information on the Coastal Plain League, please visit the league website at www.coastalplain.com, and be sure to friend us on Facebook (at www.facebook.com/coastalplainleague) and follow us via Twitter (as cpleague).