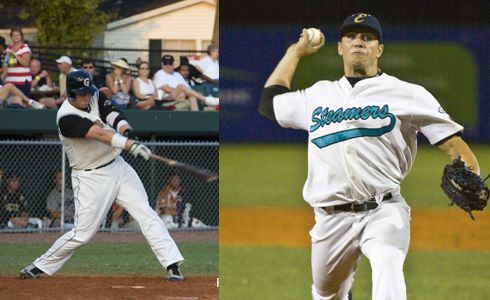 The National CPL All-Star team took the lead in the bottom of the third and fought off a late rally by the American squad Tuesday night to win 5-4 in the 2010 Coastal Plain League All-Star Game at McNair Field in Forest City, North Carolina.

A crowd of 2,412 fans piled into the home of the Owls to cheer on their favorite CPL All-Stars.

The Americans led off the first with a single by Brian Billigen (Edenton/Cornell) to right field. A double to left by Chase Vergason (Columbia / Florida Atlantic) put runners at second and third with no outs.  A walk by starter Brad McAllister (Morehead City / Barry) to Ryan Daughtry (Wilson / Barton) loaded the bases for Jake Magner (Edenton / North Dakota), who reached on a throwing error by third baseman Chas Crane (Peninsula / Winthrop) that scored both Billigen and Vergason.

Then, Kevin Deese (Asheboro / West Alabama) hit into a 4-6-3 double play that also scored Daughtry from third. McAllister would get the last out he needed to get out of the inning, but the damage was done as the American squad held a 3-0 early lead.

Despite the hole they were in, the National All-Stars managed to push two runs across in the bottom of the first to pull within one run. Nick Orvin (Columbia / The Citadel) led off with a single to third, and then advanced to second on a groundout by Will Skinner (Forest City / Middle Tennessee State). Orvin stole third and then came home on a two-RBI home run by David Chester (Gastonia / Pittsburgh).

Trailing 3-2, the National team got things working offensively again in the bottom of the third inning. With one out, Jerry Battipaglia (Outer Banks / Villanova) walked Crane and then gave up a homer to Mac Doyle (Florence / Wofford) to make the score 4-3 Nationals.

An inning later, the National All-Stars added an insurance run to their lead. Orvin drew a one-out walk and then advanced to second on a wild pitch from Patrick Dolan (Florence / Charleston Southern). Another out later, Chester drove in his third RBI of the night with a single through the left side that scored Orvin.

Down 5-3 in the top of the eighth, the Americans were yet ready to go home. Justyn Carter (Morehead City / Saint Peters) led off and was immediately hit by pitcher Chase Boruff (Forest City / Carson-Newman). Carter stole second and then third, and then crossed the plate on a groundout to short by Trey Hernandez (Florence / Texas A&M – Corpus Christi). Boruff settled in and retired the next two batters to avoid any further damage.

With the National All-Stars leading 5-4, they turned to closer Mark Montgomery (Edenton / Longwood), who didn’t disappoint. Montgomery retired three straight, including the last two on strikeouts to earn the save.